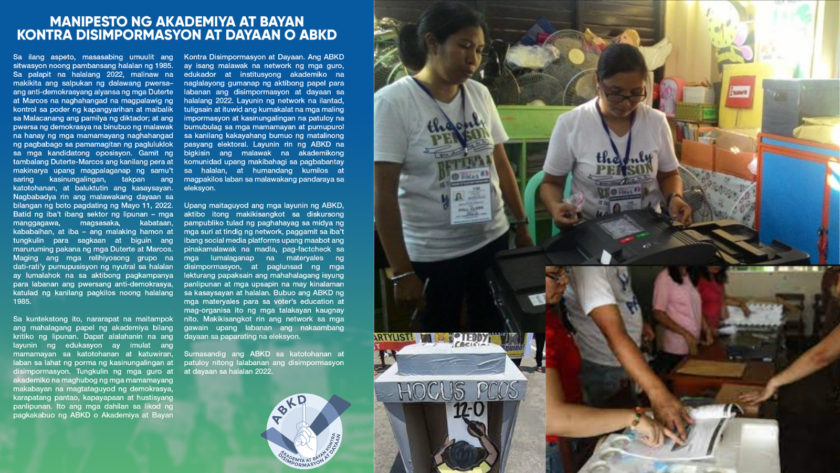 MANILA, Philippines – Members of the academic community from various public and private universities established an anti-disinformation and anti-fraud network to fight for fair and truthful elections in 2022.

Akademya at Bayan Laban sa Dismpormasyon at Dayaan (ABKD) seeks to protect and ensure that people may be able to make free and informed decisions. In its manifesto, the group highlighted the role of education in enlightening the people from lies and disinformation.

The network plans to compile sources of disinformation and produce fact-checking videos, said Francisco Guiang, one of its conveners and a history professor at the University of the Philippines (UP). These videos will be uploaded through their social media platforms such as YouTube and Facebook.

They also plan to host webinars, meetings, and other activities to educate and empower voters, and report incidents of fraud, intimidation, harassment, and other forms of electoral violations to electoral watchdogs.

“Spreading information is political, but more so the deliberate spreading of wrong information that usually comes from groups or individuals that are ‘well-funded, well-oiled and well-organized,’ said Carl Ramota, a UP Manila professor and member of ABKD.

Ramota emphasized the importance of social media in information distribution, noting that more Filipinos are getting their daily news through online platforms.

“The 2022 elections are a turning point in our nation’s political history. We are not just facing an unprecedented about of misleading and malicious propaganda, but the continued threat of corruption and human rights violations, and the possible return of dictatorship. ABKD stands with other groups and sectors to defend the welfare and democratic rights of the Filipino people.” said ABKD. (JJE)