You Are Here: Home → 2021 → December → 13 → Questions on peace rise again amid capture of teacher-revolutionary

Questions on peace rise again amid capture of teacher-revolutionary

“Under International Humanitarian Law and the Geneva Convention, Raca is a prisoner of war and hors de combat, by virtue of her being under the custody of the Marines,” Karapatan-ST said in a statement. “She has rights that should be ensured by the authorities that currently have her.”

SANTA CRUZ, Laguna – A December 11 encounter between the New People’s Army and the Armed Forces of the Philippines in barangay Tinitian, Roxas, Palawan province resulted in the death of one NPA fighter and the separation of another.

Justine Kate Raca, a teacher and member of the New People’s Army, was eventually forced to submit to Marines belonging to the AFP’s Western Command and is currently in custody as a prisoner of war. According to human rights watchdog Karapatan Southern Tagalog, however, the military is “coercing [Raca] to surrender” as part of their Enhanced Community Livelihood Integration Program (E-CLIP); something they assert is “against her rights as a prisoner of war.”

“Under International Humanitarian Law and the Geneva Convention, Raca is a prisoner of war and hors de combat, by virtue of her being under the custody of the Marines,” the group said in a statement. “She has rights that should be ensured by the authorities that currently have her.”

Karapatan ST states that the military’s efforts to force Raca to surrender “impede on her rights and dignity to hold on to her political views and principles,” and is being used as a form of “psychological warfare” against her. 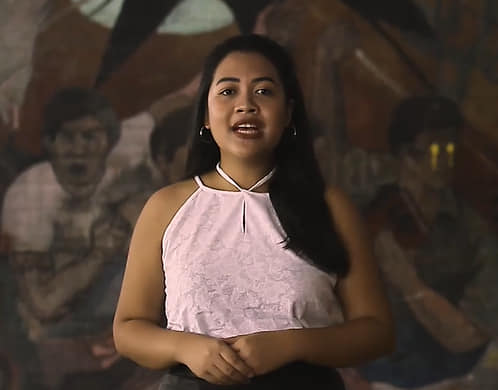 In an interview for Palawan-based Radyo Brigada, Raca was asked what she was doing with the NPA. She responded that they were “providing a service.”

“There are so many people that don’t get social services, and are prevented from making a living,” she said. “But the NPA, since we truly serve, that is what we give to those who do not get the services they need from the government.”

Raca stated that she helped children in their modules. The children would go to the base camps and she would assist them in understanding their lessons. “There are no other teachers,” she said. “I’m the only one they have.”

Karapatan ST said that the 3rd Marine Brigade must release Raca in accordance to the Comprehensive Agreement on Respect for Human Rights and International Humanitarian Law (CARHRIHL). They also claim that the lack of access to Raca constitutes a violation of Part IV, Article 4, Number 6 of CARHRIHL, which states that “sufficient information shall be made available concerning persons deprived of their liberty.”

Additionally, the ‘psychological warfare’ against Raca could possibly constitute a violation of Republic Act 9745, or the Anti-Torture Act.

“AFP WESCOM, the 3rd Marine Brigade, and the Palawan PTF-ELCAC’s only goal is to make an example of Raca and continue their militarization of civilian institutions, including schools,” Karapatan ST added.

Raca’s circumstances have raised renewed questions of sincerity about the Philippine government’s intention of ending the almost 53-year civil war with the NPA guerrillas. Under the Rodrigo Duterte administration, the Philippine state is employing a ‘whole-of-nation approach’ in hopes of ending the armed conflict “by 2022.”

At the helm of the whole-of-nation approach is the National Task Force to End the Local Communist Armed Conflict, an inter-agency group composed of military and civilian institutions. NTF-ELCAC presides over various programs ostensibly aimed at “addressing the roots of the armed conflict,” including E-CLIP.

E-CLIP, for one, aims to “help surrendering rebels return to the fold” by providing them with livelihood packages amounting to approximately P60,000 in cash and goods. The idea is to help former NPA fighters “adjust to civilian life,” while also giving rewards to surrendered arms and equipment.

Progressives and rights organizations, however, have derided NTF-ELCAC, calling its activities tantamount to a “communist witch-hunt.” Karapatan ST calls it “a fraudulent program” that the government “desperately pushes onto civilians who are not engaged in combat.”

Reports from the ground reveal that most E-CLIP ‘surrenderees’ are anything but willing. Last November 9, farmers belonging to Coco Levy Fund Ibalik sa Amin (CLAIM Quezon) were rounded up and presented as ‘NPA surrenderees’ in Agdangan, Quezon province.

Last May 1, 2020, sixteen workers from the Coca-Cola FEMSA plant in Santa Rosa, Laguna were presented as ‘NPA surrenderees.’ One of the alleged ‘surrenderees’ was Raffy Baylosis, a former union leader who was noted to have surrendered “at least twice before”, according to labor center Pagkakaisa ng Manggagawa sa Timog Katagalugan (PAMANTIK-KMU).

There have been at least 1,553 cases of faked surrenders in Laguna and Quezon provinces alone, according to partial data from Karapatan ST.

Ultimately, the group contends that the military’s “heavy-handed approach in ending the armed conflict in the country” fails to “address the roots of the armed conflict”, contrary to the Duterte government’s claims. That Raca, a teacher by profession, chose armed struggle, is proof that there are systemic problems that still need to be addressed.

“Our funds are being wasted on E-CLIP and on infrastructure projects paid for supposedly by the Barangay Development Program,” said Karapatan ST. “[These programs] fail to address farmers’ landlessness, or the resolve of native Palaw’an against wide land-use conversion towards mining and palm oil plantations.”

Rights organizations such as Karapatan maintain that the only way to resolve the armed conflict is to resume peace talks between the Philippine government and the National Democratic Front. This is despite the Duterte administration’s position to hold “localized peace talks” between individual NPA units.

The idea of localized talks has been floated as early as 2011 under the Noynoy Aquino administration. Consultants and peace advocates rejected the proposal, asking “how can localized talks solve problems that are national in nature?”

Moving forward, it seems unlikely that Duterte will see the end of the armed conflict by the end of his term in June 2022. It remains to be seen how the next administration would approach the issue of peace. (RVO)