You Are Here: Home → 2022 → January → 15 → Agri workers dismayed over gov’t directive to produce crops for export 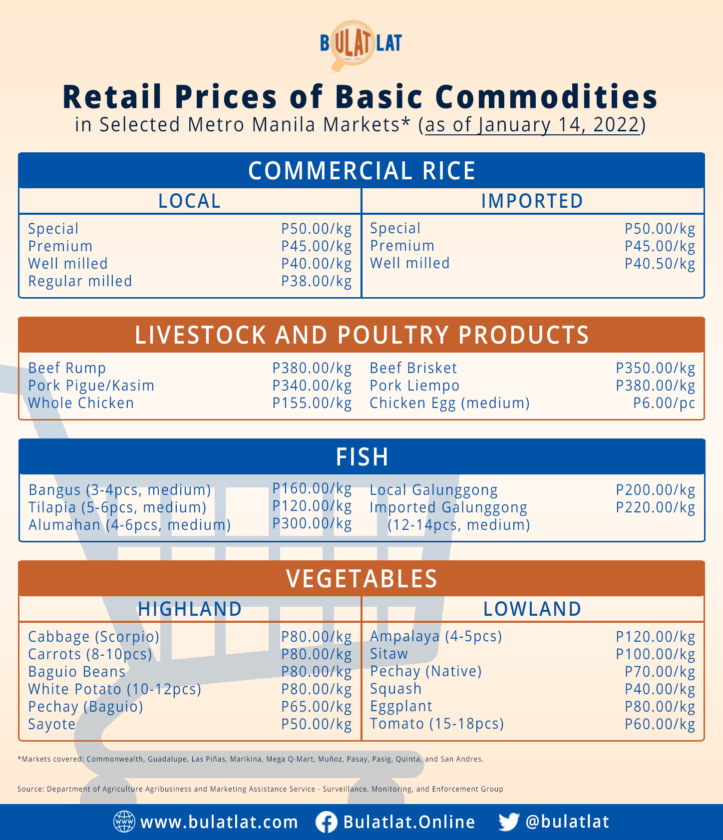 In a statement, Unyon ng mga Manggagawa sa Agrikultura Chairperson Antonio Flores responded to the issue saying that, “the Department of Agriculture is desperate to starve farmers and agricultural workers. If they continue to push farmers to plant high-value crops (HVCs) that the country can export overseas, the Filipinos will only harvest hunger.”

In their 2021 year-ender report, the DA highlighted the performance of Philippine banana exports and pineapple products, which garnered an estimated $920 million and $300 million respectively from January to October 2021.

“We enjoy a comparative advantage in banana and pineapple, and for this reason, we at the DA invest in the development of the high-value crops subsector through our High-Value Crops Development Program (HVCDP). Undoubtedly, high-value crops can provide farmers and their families, entrepreneurs, and other players in the agriculture value chain sustainable income,” said Dar.

However, UMA countered this initiative as food production for local consumption should be encouraged and supported more, especially now when the market prices of basic commodities such as rice and various vegetables are skyrocketing.

According to data from the Philippine Statistics Authority, 24.9 percent, or one out of four, of the country’s food supply in 2020 is imported. This is three points higher than the 2016 average of 21.56 percent, before the Duterte presidency.

“Local food production is the key to the problem of widespread hunger in the country,” added the peasant leader.

Flores also pointed out that pushing for the production of HVCs will give way to land-grabbing. He cited the Comprehensive Agrarian Reform Program (CARP), which allows corporations to deceive agrarian reform beneficiaries (ARBs) into entering into unfair Agri-Business Venture Arrangements (AVAs).

“In growership contracts, many farmers are at a disadvantage when corporations offer low prices in exchange for an exclusive right to purchase the harvest after dictating which crop to plant,” said Flores.

In lease arrangements, corporations are allegedly close to just stealing parcels of land with how much they lowball the rent given to ARBs in disadvantaged contracts that sometimes last for decades.

UMA stressed that Filipino farmers really have no way but to lose in the AVA framework.

Flores narrated how 1.2 million hectares of land have been dedicated to AVA plantations and produce high-value crops, “The DA’s promotion to intensify the production of HVCs is parallel to the goal of President Duterte to expand plantations up to 1.6 million hectares.”

If the Duterte regime achieves its objective, an estimated 20 percent of the country’s agricultural land will be under the plantation system.

“This means that peasants will lose sovereignty over 1/5 of Philippine agricultural land, and will no longer be able to focus on local needs. The only crop that can be planted here is what foreign agri-corporations will dictate,” UMA said.

Further, wages on plantations are often below legal standards. Aside from the meager minimum wage rates in the regions compared to the National Capital Region, it is even further away from the standard living wage.

In Davao del Norte, even if the minimum wage is given, the P396 (US$7.71) earned by banana workers will not be able to keep up with the price of a commodity. In South Cotabato, meanwhile, Dole Philippines pays only P5 (US$0.10) to its contract growers for each kilo of pineapple.

The DA directive is said to take advantage of the welfare of the peasantry and the country’s food security to make money for the huge corporations it favors.

Flores concluded saying, “Food production must be made a priority for local consumption – and real land reform will be achieved – not foreign control of land through the plantation system.” (JJE, RVO)