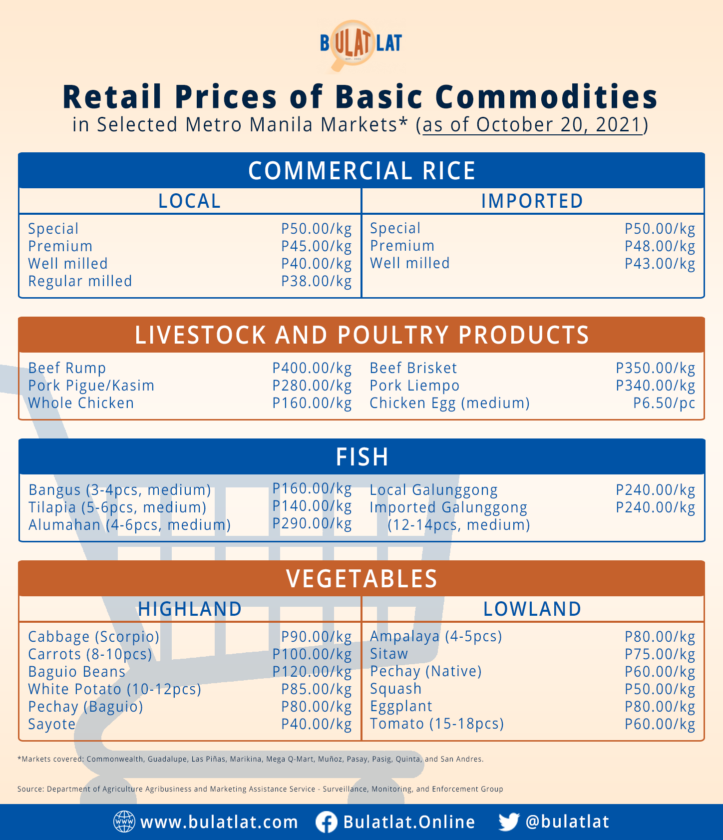 MANILA – Farmers and consumer groups called on those aspiring to be president in the next year’s elections to prioritize addressing the worsening hunger and food insecurity in their platforms, adding that the policies under President Duterte that allowed these must be reversed.

“A lot of Filipinos have nothing to eat, as well as food producers. We are fighting against the intensified importation of rice, fish, vegetables, meat, and instead develop local production. We are challenging those who will run in the elections, that if they win, they should make laws and policies for the benefit of farmers and poor consumers. We will remain vigilant because most of those who are running come from the elite, bureaucrat capitalists, and landlords,” said women farmers group Amihan secretary-general Cathy Estavillo.

Read: Carinderia vendors and workers lean on each other as food crisis looms

Amihan, consumer group Bantay Bigas, and farmers group Kilusang Magbubukid ng Pilipinas said in separate statements that those running for public offices must provide solutions to the ongoing crisis in the food and agriculture sector.

“Public servants especially at the national level must address the most basic need of Filipinos – food. Yet, most presidentiables remain silent on food self-sufficiency. The next president needs to reverse Duterte’s legacy of worse food importation and hunger,” said KMP national chairperson Danilo Ramos.

Citing data from the Philippine Statistics Authority, KMP said 24.9 percent, or one out of four, of the country’s food supply in 2020 is imported. This is three points higher than the 2015 average of 21.56 percent, before the Duterte presidency.

He referred to the Rice Liberalization Law implemented in 2018, which removed quantitative restrictions on imported rice, as well as the Department of Agrarian Reform’s Administrative Order No. 1 of 2019, which hastened land conversion into non-agricultural uses.

“Instead of recalibrating and aggressively supporting local food production, neoliberal economic managers doubled down on its failed policies during the pandemic and pushed for more and more imports,” Ramos said.

The present range of prices is costly to minimum wage-earning families or poor consumers, especially when the Duterte government-imposed repeated lockdowns causing job interruptions and losses of livelihood sources.

Access to food is far more pronounced now, with the massive unemployment in the middle of a pandemic. As it stands, the Philippines is among the three Southeast Asian countries that have the sharpest declines in employment from 2019 to 2020, with the government’s own data stating that unemployment grew by 1.5 million to a high of 3.9 million in August 2021 from pre-pandemic January 2020.

In a statement, thinktank Ibon Foundation said government data showed that over 19 million or more Filipinos take in more than one job to make ends meet. This does not include millions hired by private enterprises. The number of part-time workers also spiked by a huge 2.7 million to 16.1 million.

“As a result, it projects that less people in the region will escape poverty in 2021, and that more than 90 percent of those who will stay poor will come from the Philippines, Indonesia, and Myanmar,” said Ibon.

Estavillo said those running for national office must provide clear solutions on how to attain self-sufficiency and food security in the country.

“Increasing food importation paves the way for increase food smuggling. All these lead to more income losses for farmers, leading to less food production and worse hunger for every Filipino. Food self-sufficiency is in the interest of the whole nation and 2022 aspirants must dedicate more attention to it,” Ramos said.

Meanwhile, Ibon maintained that the Duterte administration should immediately provide emergency assistance to 18 million poor and low-income families. IBON proposes that each household receive P10,000 ($197) per month for at least two to three months.

“More ayuda has to be immediately given to millions of poor and vulnerable families to ensure that everyone has economic access to food. Domestic agricultural production also has to be supported to strengthen food security,” Ibon reiterated.

The group also suggested that Congress can approve the Makabayan bloc’s proposed amendments to the 2022 budget for economic stimulus which includes P240 billion ($4.7 billion) for P10,000 ($197) cash assistance to families and P100 billion ($1.9 billion) for unemployment subsidies and direct financial assistance.