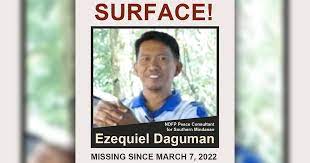 DAVAO CITY, Philippines — The National Democratic Front Southern Mindanao said claims by the Armed Forces of the Philippines that their peace consultantJASIG was killed in an encounter in Davao del Norte was not true.

Its spokesperson Rubi del Mundo in a statement said Daguman, age 50, was abducted and killed.

They said Daguman along with his driver, Bensito “Jojo” Julio, 38, was abducted by members of the Armed Forces of the Philippines (AFP) while en route to a peasant community in one of the banana plantations in New Corella town in Davao del Norte.

The Eastern Mindanao Command declared on March 27 that troops of the 1001st Infantry Brigade killed Daguman and two of his companions identified as Ruel Baylon and Quirino Remegio during an encounter in Brgy. Tupaz Maragusan, Davao de Oro on March 27.

“Our troops who have been conducting focused military operations since last year to sustain our crackdown against the remaining CTG (communist terrorist groups) were alerted by concerned citizens on the presence of armed groups attempting to plant an IED (improvised explosive device) along the road. This was immediately responded to by the 1001st Brigade’s troops, which led to a series of armed encounters and resulted in the death of Daguman and his comrades,” Eastmincom commander Lieutenant General Almerol said in a statement.

But del Mundo said that the AFP has unwittingly exposed its standard operating procedure of misinformation and fake news to conceal its innumerable crimes.

“The same script had been used to cloak the AFP’s brutal murder of five civilians known as New Bataan 5, who were abducted and executed in New Bataan, Davao de Oro in late February,” she added, referring to the murders of Lumad school volunteers and a community health worker whom the military claimed were NPA rebels.

The NDF asserted that as a peace consultant, Daguman is covered by the Joint Agreement on Safety Immunity Guarantees (JASIG) between the NDFP and the Government of the Republic of the Philippines. The peace talks between the government and the NDF resumed in 2016 but President Rodrigo Duterte terminated it in late 2017.

Del Mundo urged human and peace advocates to condemn this case of state terror and that justice should be served to Daguman’s family and other victims of Duterte’s tyranny. (davaotoday.com)