What gov’t workers want from the next Philippine president 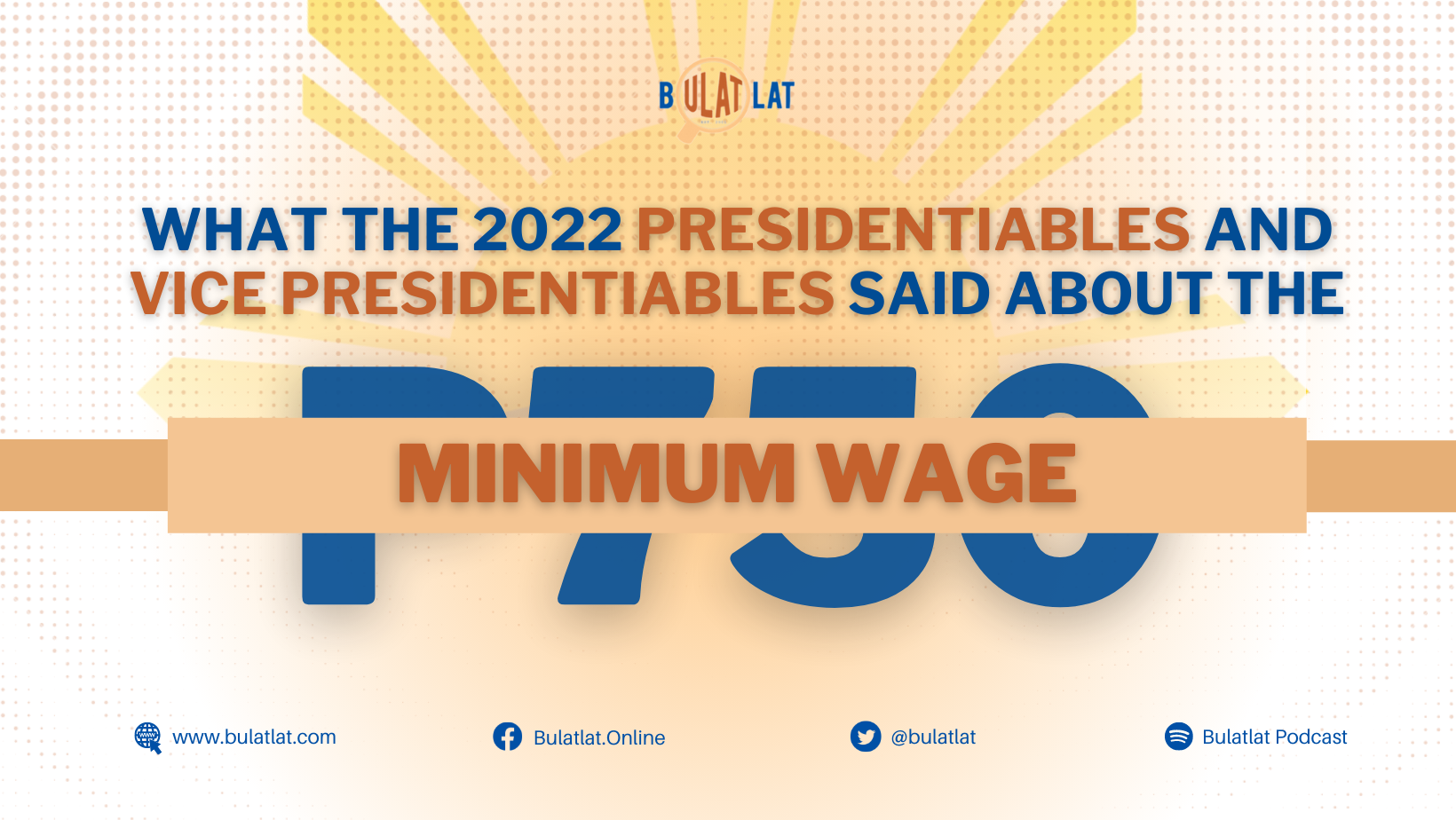 This is how government worker Roxxanne Fernandez thinks of the government’s plan to provide P200 monthly aid to families affected by the increasing prices of staple goods and services. Such aid, Fernandez said, would not meet the already depressing economic situation of families.

“We do not know where the government is getting this amount when we have been asking for a salary hike for the longest time,” Fernandez said in an online press briefing organized by Courage, a government workers union.

In a previous statement by Courage, the group said those running in this year’s election should address their calls for their right to security of tenure, which should be “realized and enjoyed by workers in the country.”

“Even regular employees are having trouble making ends meet for their families. The situation is much worse for our contractual workers who may lose their jobs anytime,” said Fernandez, who is also the spokesperson of Kawani Laban sa Kontraktwalisasyon. 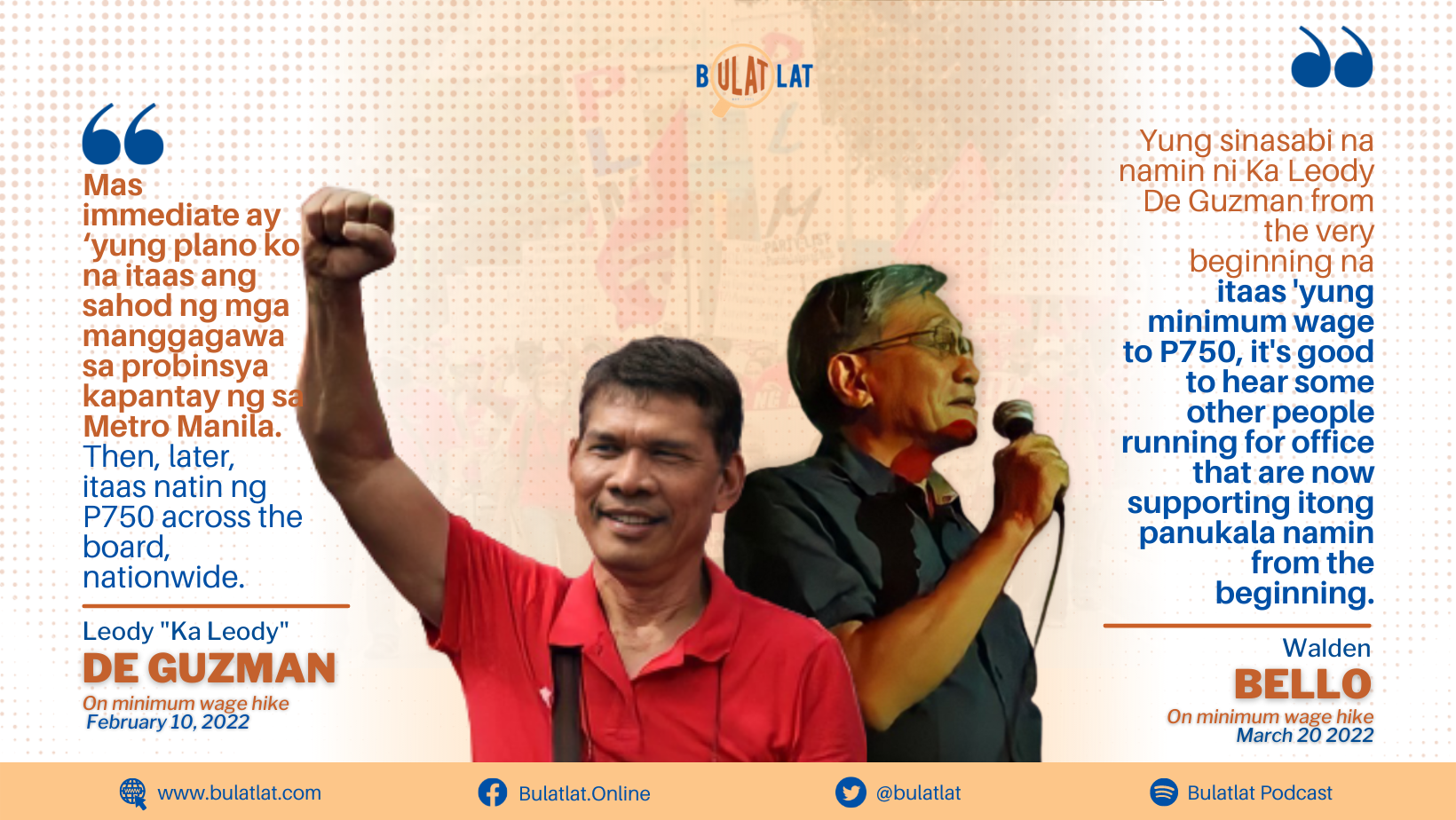 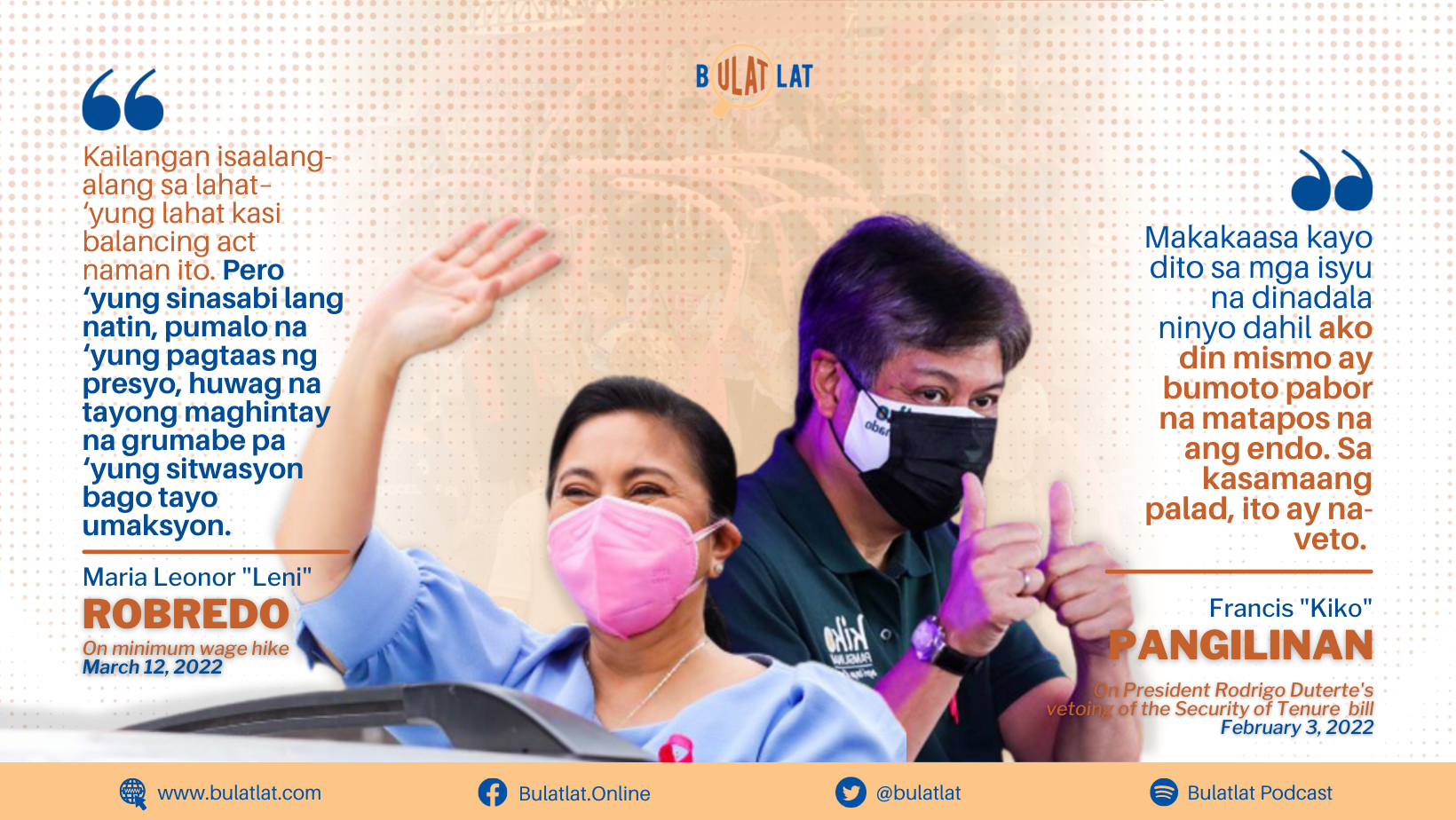 Government employees in local government units, according to Santiago Dasmariñas Jr. of Courage, receive much lower pay, depending on their classification.

All presidential candidates, fortunately, agreed that wage increase is needed.

Both Vice President Leni Robredo and Manila Mayor Isko Moreno acknowledged the need to have a “balancing act” on the issue of increasing wages and the increasing prices of staples. The gap should be narrowed to allow business owners to earn, and for workers not to lose their jobs. 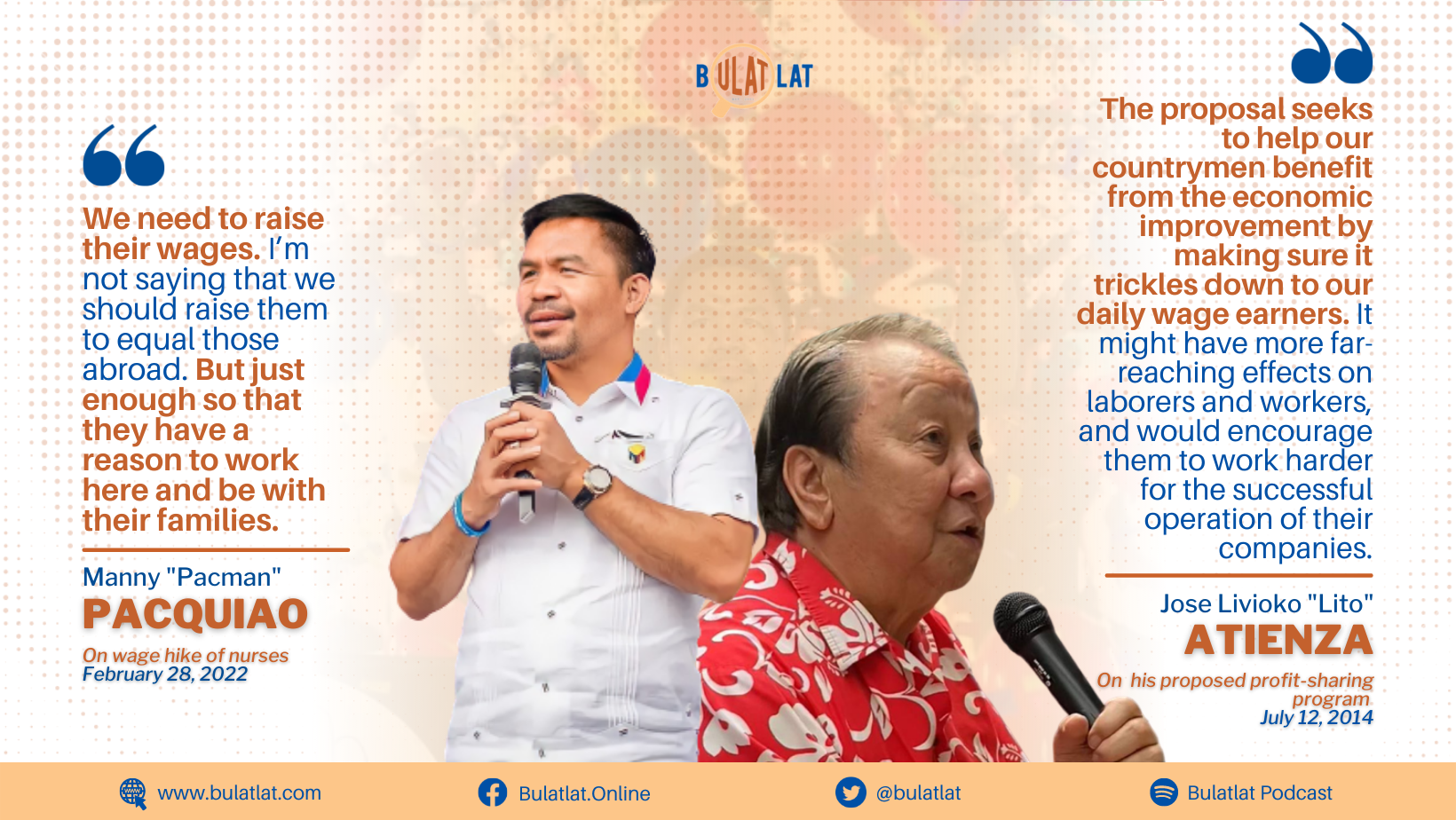 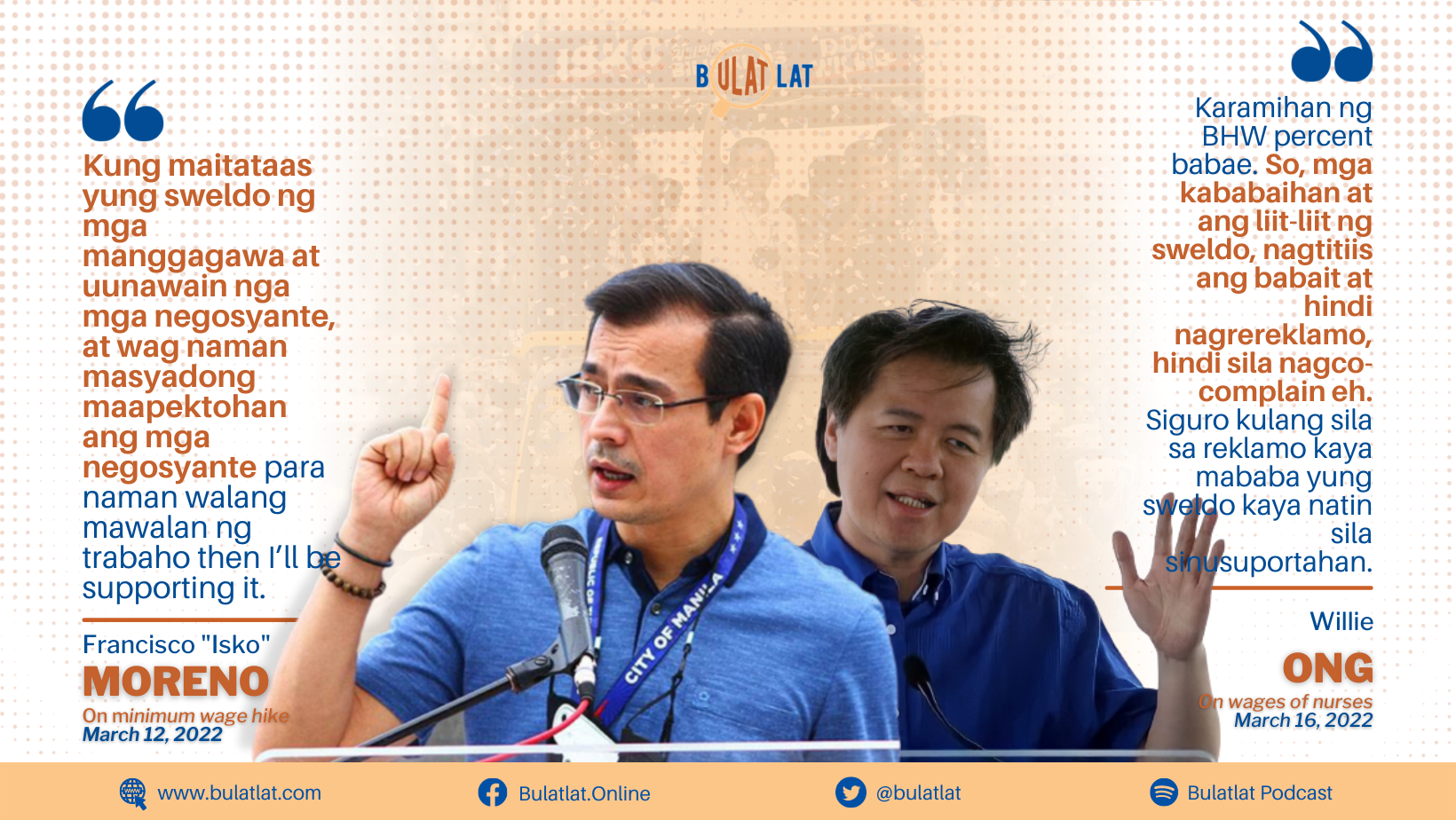 Sen. Panfilo Lacson, on the other hand, said that the insufficiency of the minimum wage is not just in Metro Manila but for the rest of the provinces as well, especially with the increasing price of oil.

Meanwhile, Sen. Manny Pacquiao agreed that there should be salary standardization across the board, adding that families need not be separated as many would choose to work abroad in order to provide for their families. Similarly, unionist Leody de Guzman said he is pushing for a unified minimum wage across the country.

“There have been studies that show how factories did not shut down after increasing workers’ salaries. In fact, the economy will be boosted with people having enough to buy,” De Guzman said in Filipino.

Former senator Ferdinand Marcos Jr., on the other hand, acknowledged that while there is a need to increase wages, boosting the country’s economy should come first. 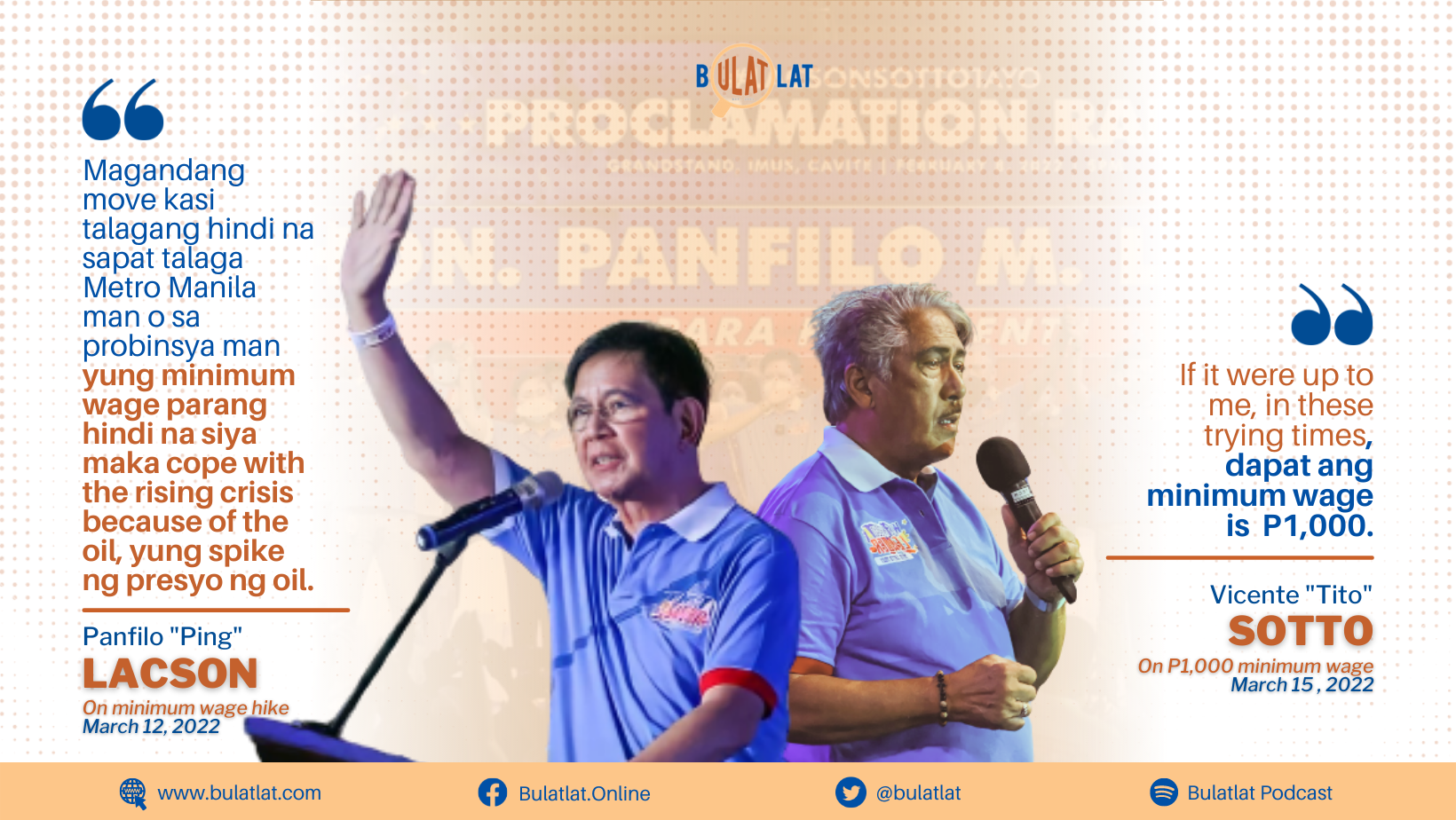 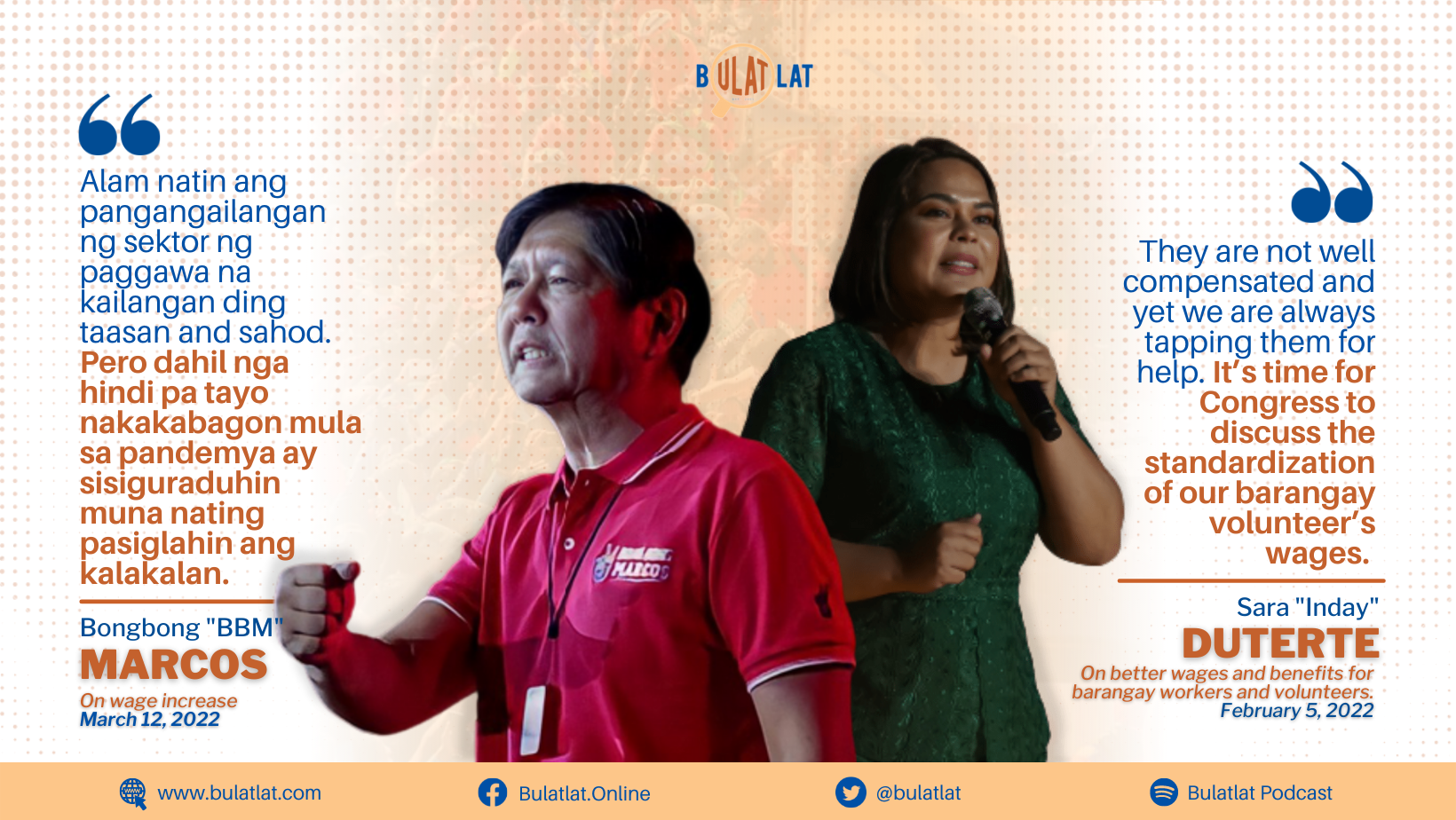 Like wage increase, presidential candidates also agreed that contractualization must be revisited.

Both Vice President Robredo and Sen. Lacson said they will aim to strike a balance between the interests of business owners and workers.

Moreno, on the other hand, is not particular on the nature of tenure as he is more focused on temporary and immediate jobs. When the country’s economy improves, he said, the government can return to the issue of ending contractualization, adding that, “definitely it will happen. If there is a need to have a law, then so be it. We will try to be sensible and explain to Congress and the Senate that this thing must be attended to.”

Sen. Pacquiao said he agrees to end contractualization. Before the Rotary Club Manila’s Weekly Membership Meeting in November 2021, he said he will study this proposal. Meanwhile the campaign team of Marcos Jr. said that he is interested in prioritizing a law that will provide tenure security.

Of all the presidential candidates, only De Guzman vowed to put an end to contractualization on his first day of office, citing the need to prohibit trilateral work agreements, banning of manpower agencies, and to ensure that workers are directly hired and provided their full benefits and legal protection.

As it stands, there is no mention of a wage increase as President Duterte’s term comes to an end. There is also no update on the failed campaign promise of ending contractualization.

In a statement, labor group Kilusang Mayo Uno said that “as the election draws near, let us make sure that Duterte will not be able to make a political comeback. Workers will support candidates who have concrete plans, those who are ready to listen and engage.” (RTS, RVO)