You Are Here: Home → 2022 → October → 28 → Trade union organizer out on bail, asserts not receiving complaint prior his arrest

Trade union organizer out on bail, asserts not receiving complaint prior his arrest 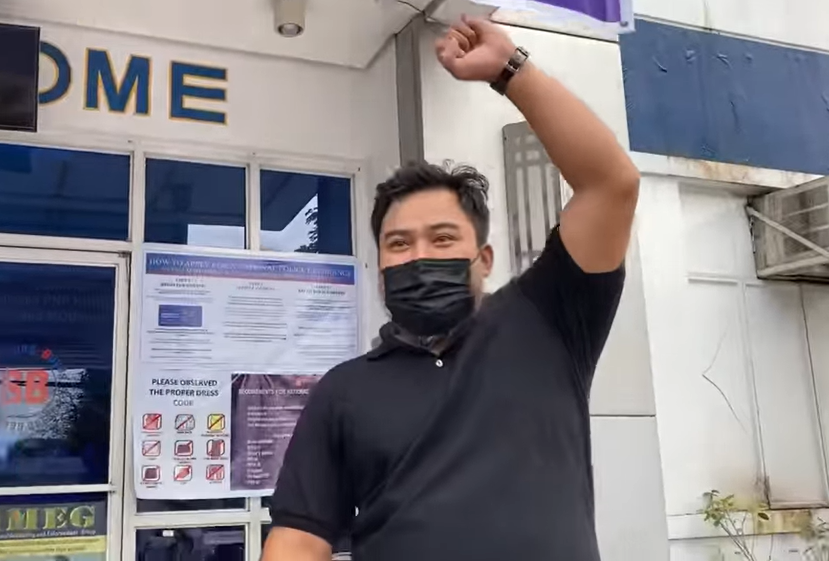 Cordero was arrested on Oct. 26, 11:00 p.m. in his house in Quezon City. According to Karapatan Metro Manila, Cordero was served with a warrant of arrest dated Oct. 24 for charges of frustrated homicide. The warrant of arrest was issued by Judge Mohammad Tamano of San Mateo Regional Trial Court Branch 77.

Cordero is the chairperson of the Labor Sector of the QC City Development Council, and member of Samahan ng Manggagawa sa Quezon City. He is also the campaign officer of the Urban Poor Coordinating Council – National Capital Region.

In a video by Tudla Productions, Cordero thanked his supporters as well as his counsel, Lui Santos who assisted him in his case.

According to his lawyer, Cordero did not receive a copy of the complaint affidavit, which is irregular. “We could have filed a counter affidavit,” Santos said.

Santos also questioned why Cordero did not receive a complaint affidavit but the police were able to serve him the warrant in his residence.

“They know the address when they are arresting the person, but they cannot even send the complaint affidavit to his address. This is what’s concerning in cases like this,” Santos said in Filipino.

Cordero asserted that he has no knowledge of the accusations against him and that the charges are trumped-up. He also did not know the co-accused in the said case.

Santos also said that the addresses of the co-accused are all in the Calabarzon area. Only Cordero is residing in Quezon City.

In a statement, labor group Kilusang Mayo Uno (KMU) strongly condemned the arrest of the trade union organizer saying that only weeks ago, police also did the same with its international officer Kara Taggaoa and transport leader Helari Valbuena. They were both out on bail.

“It can be remembered that Kara and Larry also went through with this. A trumped-up case was filed against them without them receiving anything about the case and was arbitrarily arrested. We will not allow this modus operandi of the state against the workers,” the group said in a statement.

BPO Industries Employees’ Network (BIEN) Philippines meanwhile said that Cordero was one of the organizers of Operation ACW (After Call Work) that helped communities in relief work during natural calamities.

“Since Typhoon Yolanda, Banjo is a formidable partner of BIEN in organizing relief efforts and activating our membership to participate in different community work. Many calamities have passed, and he has been our partner throughout the aftermath relief work,” the group said in a statement.

Meanwhile, Karapatan Secretary General Cristina Palabay urged the court to look into the filing of charges against Cordero, and see whether his right to due process was violated.

Palabay said that none of Cordero’s activities “make him a criminal.”

“Despite the previous dismissal of trumped up charges that were rendered baseless in the courts, state forces continue to file criminal charges against activists and rights defenders, taking away from them significant and productive time from their work and service to communities and in defense of people’s rights. We demand the release of Cordero, and the outright dismissal of charges against him,” Palabay said. (RTS, RVO)