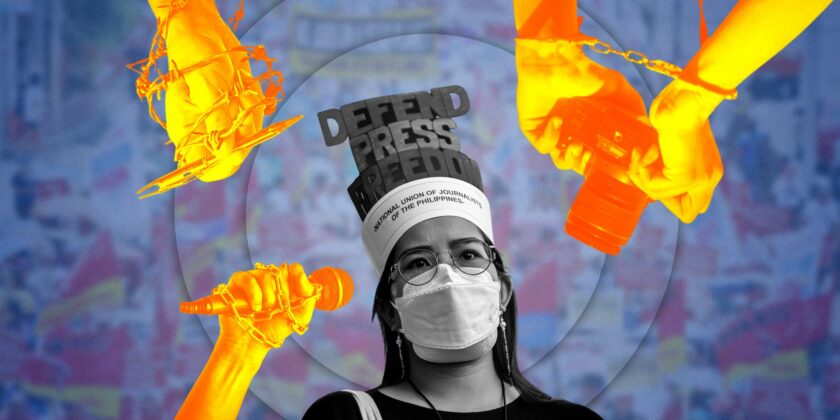 MANILA — A group of Filipino journalists noted similar patterns of attacks among their ranks and the slow delivery of justice in the first six months of Ferdinand Marcos Jr.

The National Union of Journalists of the Philippines (NUJP) Media Safety Office recorded a total of 38 new cases since President Ferdinand Marcos Jr. took office in June 2022, and has noted the increasing weaponization of the law against dissenters and critical voices.

Just recently, Baguio-based journalist Frank Cimatu was convicted of cyberlibel over charges filed against him by former Agriculture Secretary Emmanuel Piñol in 2017 over the former’s Facebook post.

There are also 941 counts of cyber libel filed by the local governor of the Quezon province against journalists Darcie de Galicia and Noel Alamar.

According to the 2022 Global Impunity Index of the Community to Protect Journalists (CPJ), the Philippines is the seventh among the worst countries in prosecuting killers of journalists.

The NUJP has also noted the possible threats to press freedom with the recent passing of a law mandating SIM card registration.

This the Philippine government posed as its solution to the phishing and other forms of cyberattacks that ordinary folk are receiving through text messages, but were met with criticisms as critics raised alarms over possible infringement on data privacy and that this may be used to conduct surveillance.

The SIM card registration began last Dec. 27 and mobile users have 180 days to register their information

In an earlier statement, the NUJP said this law will have negative impacts on their work as journalists, as it added risks especially to those pursuing sensitive topics such as conflict, crimes, and corruption. “It also poses risks to our news sources and would make our work for transparency and the free flow of information more difficult. SIM registration also raises concerns on the privacy not just of journalists but also of the public in general,” the NUJP said.

The group also echoed fears that this will be used as a tool for surveillance amid threats of red-tagging.

“If the government cannot protect our data, cyber criminals would have a field day exploiting our data for devious purposes,” the NUJP added.

Red-tagging and terror tagging also remained rampant among the ranks of journalists, particularly those who are critical in their reporting.

NUJP Secretary General and Bulatlat editor-in-chief Ronalyn Olea was tagged on an SMNI show as “operatibong internet operator” for the Communist Party of the Philippines, the New People’s Army, and the National Democratic Front of the Philippines.

Also among the journalists and media groups who were red-tagged this year include Bulatlat’s Associate Ediitor Danilo Arao, ABS-CBN’s Mike Navallo, Inquirer’s Dexter Cabalzo, Atom Araullo, Vergel Santos and Inday Espina Varona. The NUJP, Foreign Correspondents Association of the Philippines, Movement Against Disinformation were also labeled as communist propagandists for their advocacy for press freedom.

Meanwhile, for Bulatlat, the constant red-tagging and terror tagging led to a Philippine government order blocking Bulatlat and 26 other websites for their purported links to terror organizations. A Quezon City court has since granted its plea for a preliminary injunction, and now allows readers in the Philippines to access Bulatlat’s website.

Read: What you need to know about the blocking of Bulatlat website, 26 others

The newsroom also raised the P100,000 bond in two days through microdonations from their readers and supporters. The case is ongoing and is set to conduct a pre-trial hearing on Jan. 17, 2023.

The websites of Pinoy Weekly and of progressive organizations remain blocked due to the National Telecommunications Commission order.

The international community has also noted the attacks against press freedom and of expression here in the Philippines.

The Philippines, for one, accepted two hundred recommendations from the member-states of the United Nations Human Rights Council during its Universal Periodic Review (UPR) last November, including the recommendation to refrain from using legislation to limit and repress freedom of expression.

As one of the main features of the Human Rights Council, the UPR aims to assess the compliance of countries to their international human rights commitments.

In their released fifth periodic report, the council expressed concern about the “persistent violation of the freedom of expression” in the Philippines. ABS-CBN’s closure–- its subsequent denial of franchise renewal, and Rappler’s revocation of certificate of incorporation were just some of the examples stated in the report.

It also highlighted how the widespread harassment and intimidation usually through State-sponsored attacks against independent media outfits, coupled with the numerous reports of journalist killings, affect the way the Philippine media community operates.

The report also raised concerns about the potential restrictions on freedom of expression under the Anti-False Content Bill of 2019 as an amendment to the already controversial Cybercrime Prevention Act of 2012.

The bill, which was filed by Representatives Josephine Lacson-Noel and Florencio Gabriel Noel on August 2, 2022, seeks to include “fake news” as one of the content-related offenses. Under the bill, the “creation and dissemination of fake news” is punishable with imprisonment of up to six years and a fine of at least P200,000. The bill also allows the Department of Justice’s Office of Cybercrime to modify or remove information from a website as long as it is on a “valid and sufficient basis.”

The council believed that the bill uses an undefined “reasonable belief” standard to determine fake news. It also said that the bill only adds to the existing concern on the continued criminalization of defamation under the Revised Penal Code, and of cyberlibel— both of which are used against journalists, human rights defenders, and even activists to suppress criticism and repress dissent against the government.

In its recommendations, the UN Human Rights Council insisted on immediate measures to ensure that everyone can freely exercise the right to freedom of expression. They also asked the state to refrain from prosecuting and imprisoning journalists, and other civil society actors for expressing their opinions.

It also recommended the decriminalization of defamation, adding that: “imprisonment is never an appropriate penalty for defamation.”

NUJP welcomed the recommendations of the UPR, and stated that it only validated what press freedom and freedom of expression advocates have been observing and warning about: a clear crackdown on democratic spaces in the Philippines.

NUJP Chairperson Jonathan de Santos said that the democratic space has been shrinking after the onslaught of physical attacks and harassment, particularly through labeling and red-tagging. He also raised the weaponization of laws like libel to discourage and stifle dissent and critical media.

“The current administration has said it will uphold human rights and press freedom and accepting these recommendations would be a big help towards operationalizing those statements,” De Santos told Bulatlat.

He also mentioned how the government has continued to deny that they engage and encourage the culture of red-tagging, and insisted that linking legal advocacies and activists to armed groups is “part of democracy.”