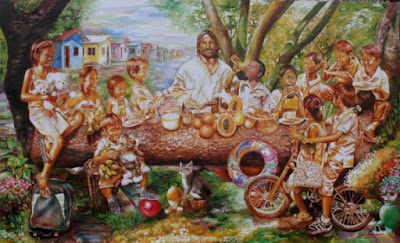 By SNAP MABANTA
National Council of Churches in the Philippines

And we come to the text right after John was asked by religious leaders whether he was the Messiah.

As Jesus was approaching, John the Baptist testified that he was the lamb of God, the man he was not worthy of untying his sandals, the man who surpassed him because Jesus came after him, and the man he was referring to when he said: “I am the voice of one calling in the wilderness, ‘Make straight the way for the Lord.”

How did he know that Jesus was indeed the one chosen to be God’s lamb? At the end of the text, he further said ‘The man on whom you see the Spirit come down and remain is the one who will be baptized with the Holy Spirit.’

But what does it take to be a lamb of God? What was Jesus’ earthly journey before the ultimate demonstration of being God’s lamb?

When I hear the word “lamb” associated with bible stories, I would immediately picture in my mind Abel’s offering of the best portions of the firstborn of his flock (Genesis 4:4). It also reminds us of the Jewish tradition of the paschal lamb- where a lamb is sacrificed for the first Passover. And so many believed that when John said, Jesus is the lamb of God who will soon take the sin of the world, we immediately welcome the passion and death of Jesus, exhibited by the iconic image of Jesus hanging on the cross, dying in order for our sins to be taken away. But then, we miss a significant part of Jesus’ journey, and that is his earthly ministry leading to his death.

Right after John 1:34, it showed further Jesus being seen around to gather his disciples. And we find Jesus not in grand temples and in religious gatherings. In the text, Jesus is found among his disciples in villages, by the seashore, in the mountains, and in their humble working places. Jesus showed us a great deal of working side by side with the people. That the task of creating heaven on earth requires groundwork and community effort together. In this story, Jesus was demonstrating that his ultimate task of taking away the sin of the world cannot be done by him alone. The redemption of the world for the better requires the recognition of a collective task, not by anyone alone and not by a single entity.

And after calling his disciples, we witnessed how Jesus did his ministry – not preaching in religious gatherings, but being with the ordinary people, with the sick, with the imprisoned, with the women and children, and those who were pushed at fringes by the ruling elite.

Jesus, as the lamb of God – was not a picture of an offering magically offered to appease the Lord. Jesus, as the lamb of God, went through a well-grounded ministry that was felt and seen among the people. A pulsating ministry that served the least of the least, and questioned the powerful. And in the end, Jesus’ role of being the lamb of God went full circle- when he was crucified by the Roman Empire and died on the cross. A lamb of God was ultimately sacrificed so that more people will be awakened and join the movement he started to organize while living here on Earth – not for himself, but for a better life for the people whom he loved and served, and and then the word became flesh and dwelt among us.