On Dec. 11 stopthekillings.be, a coalition of 65 trade union organizations, NGOs and political parties, held a torch vigil in front of the Philippine embassy in Brussels at the occasion of international human rights day. They commemorated the victims of political assassinations since the start of Gloria Macapagal-Arroyo’s presidency in 2001. At the same time, the torch vigil made a strong statement against the continuing operations of death squads in the Philippines.

BRUSSELS – Originally, the target was to mobilize 750 participants on Dec. 11, a day after the International Day of Human Rights. The target number corresponded with the number of trade union activists, peasant leaders, members of progressive political parties, lawyers, journalists etc. – victims of extrajudicial killings whose names were listed in the records of Philippine human rights organizations at the time the action was planned. However, on Dec. 11 the number had risen to 797. The idea was to have the search for justice for each of the victims represented by one participant. It was a huge task. 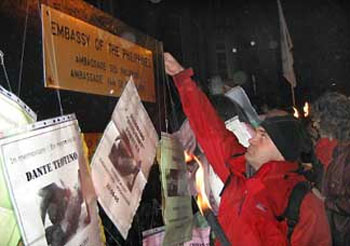 IN MEMORIAM: Belgian activists hang pictures of Filipino human rights victims at the door of the Philippine Embassy in Brussels, Dec. 11 (Photo by Ikuko Ueba / bulatlat.com)

As it turned out, the target was even surpassed. Not only the victims of political killings were represented but also the 200 Filipinos who disappeared for political reasons in the same period. One thousand people from all over Belgium – and even from France and the Netherlands – came to Brussels that day to demand decisive action from the Philippine government.

Each participant was carrying the name of one of the victims on his chest. Nobody was forgotten, whether it was a well-known leader of a people’s organization or a child that was killed by a stray bullet during an attack. Besides, the presence of Dr. Chandu Claver, who lost his wife in an attack in Tabuk, Kalinga, northern Philippines last July, made the personal links with the victims even more concrete.

Dr. Claver spoke to the crowd as they assembled in the rain near the Philippine embassy. He testified about the consequences of the attack that killed his wife last July 31 and left him seriously injured.

“Probably I will never be able to work as a surgeon again and I’m still hiding because of the continuing threat to my life,” Dr. Claver said. He added that international pressure is important to make the Arroyo regime accountable.

While the torch march slowly started to move, a delegation went ahead for a dialogue with Philippine Ambassador to Belgium Cristina Ortega. Bert De Belder, the coordinator of the NGO intal, expressed the concerns of the demonstrators. Reps. Eloi Glorieux and Jan Roegiers, from the Groen! and Sp.a-Spirit political parties, gave the ambassador a copy of the campaign’s unity statement signed by 28 members of the Flemish parliament. Rachel Cohen of the International Federation of Journalists and Philippe Van Muylder from the Brussels chapter of the FGTB trade union highlighted the fate of their colleagues who were killed.

After the dialog, the delegation reported to the demonstrators. The ambassador could not but admit that there is an increase of unexplained murders of progressive personalities. She skirted the government’s responsibility, however, questioning some of the human rights organizations’ data and trying to put the blame on criminals and the CPP-NPA. Apparently, trade union organizers and peasant leaders, who hardly have a peso in their pockets, are now primary targets for robbers.

It even became embarrassing when she mentioned concrete cases and provided documents about them to the delegation. According to these documents, a certain Edwin Mascarinas would be “very much alive”. In reality his lifeless body was found on a rice field on April 14, 2004, one day after he was brought to the local detachment by the military. Abe Sungit from Palawan was the former leader of a “communist terrorist group,” she said, while in fact he was a respected member of the UCCP. In 1999, Sungit was mentioned in Amnesty International’s annual report as a victim of torture by the military. Bishop Ramento would have been the victim of a robbery with homicide—even if not one single member of his church believes that theory.

Meanwhile, the demonstrators’ slogans could be heard throughout the protest march and vigil: “Stop the killings!” Toward the end of the vigil, spontaneously, the people started to hang their placards with the names of the victims at the gates of the embassy to underscore the responsibility of the Philippine government.

The torch march was concluded with a speech by Johan Fobelets who spoke in behalf of the stopthekillings.be coalition. He was carrying the placard with the name of Jesus Servida, a trade union organizer who was killed only a few hours earlier in Cavite.

“Your presence is a strong statement against the climate of impunity in the Philippines,” Mr. Fobelets told the protesters, “and with your support we continue to support the Philippine people’s movement in its struggle for justice.”

The Filipino migrants who were present were moved by the massive show of solidarity. “Even during the Marcos dictatorship we never experienced this,” one of them quipped. “It is the biggest demonstration of solidarity with the Filipino people ever on the European continent!” (Bulatlat.com)