A meager P18.65 ($0.42) per day is the equivalent of the ten percent increase to Salary Grade I government employees, which includes health workers in public hospitals.

A big chunk of his salary is gobbled up by payments for Government Security and Insurance System (GSIS) and Pag-ibig loans, personal loans and taxes.

Even though his wife is working abroad, Dionisio still finds it hard to make both ends meet.

His three children have transferred from private to public schools due higher tuition and other fees. To cut expenses on transportation, he acquired a motorcycle and still pays for it on an installment basis.

Asked about the ten percent salary increase for government employees, he said, “Hindi namin naramdaman.” (We never felt it.)

Dionisio is one of the thousands of health workers nationwide who grapple with low salary and limited benefits.

According to the Alliance of Health Workers (AHW), the ten percent salary increase is only P18.65 ($0.42) per day for Salary Grade I workers. 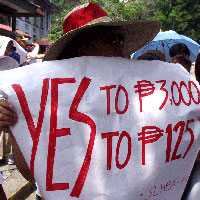 She said that Arroyo’s tarpaulins with the slogan “Ramdam ang Kaunlaran” (Progress is felt) is a big insult to government workers.

She described their condition, “Butas na ang bulsa, hikahos na.” (Pockets empty, struggling to survive). She added, “Our present take home pay even with the measly ten percent hike could not even take us home.”

Manuel also said that the long-awaited benefits accorded by law such as the subsistence allowance, cost of living allowance (COLA) backpay, increase in hazard pay “remain only as dreams” as these are subject to the availability of funds.

She also criticized Arroyo for not allocating funds for the implementation of the Nursing Law. The law mandates the increase of entry salary grade for nurses to Salary Grade 15 or P16,000 ($361.745) per month. Most nurses are classified under Salary Grade 10.

The AHW reiterated their demand for a P3,000 ($67.827) salary increase for government employees.

Caguiat said that while there are many well-meaning doctors who would want to serve the poor in rural areas, the economic conditions and lack of support from government compel them to work abroad. Caguiat said that 80 to 90 percent of municipal health officers in the country are taking up nursing.

“The conditions are not inviting,” Caguiat said. She deplored that those who go to far-flung areas are even branded as rebels.

“We ask Arroyo, where have the doctors gone? If we are losing our doctors, who will be the ones to look into the people’s health?”

Caguiat also called on the Arroyo government to address the plight of the poor. Caguiat said, “It is frustrating for us to treat them and then send them back to their abject conditions.” (Bulatlat.com)