Students to Save P710 a Month if VAT is Scrapped

A youth group revealed that an average college student would save at least P710 ($15.805) every month if the value-added tax (VAT) on products and services were scrapped.

A youth group revealed that an average college student would save at least P710 ($15.669 at an exchange rate of $1=P45.31) every month if the value-added tax (VAT) on products and services was scrapped.The Youth for Accountability and Truth Now! (Youth ACT Now!) recently launched its nationwide campaign for the removal of 12 percent VAT on basic consumer goods. Entitled ‘SUMA-TOTAL: Do the VAT Math’, Youth Act Now aims to “reach out to the broadest spectrum of the youth sector to explain how the VAT burden affects them. ’In a statement, the group said, “To justify continuous VAT collections despite growing public outrage, [Mrs. Gloria Macapagal] Arroyo attributed infrastructure investments, government subsidies and economic programs to revenues acquired through VAT collections. We beg to disagree.” Alvin Peters, Youth ACT Now! spokesperson maintained that VAT impositions on power and petroleum products as well as the 12 percent mandatory VAT collection on almost all consumer products are a burden to Filipinos. Peters presented their group’s computations.

Peters said that the P708.12 ($15.628) VAT collected from an average college student per month is equivalent to food for five days, school supplies for two additional months, toiletries good for six more months, two weeks’ worth of transport fare, a book, or more funds for photocopying needs and almost half of a month’s cost of bed space/boarding house rentals. 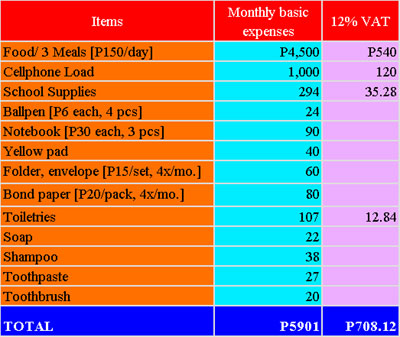