For 34 years, the Kalabaklabakan Mountain Clinic has provided continuous health services to the people, expanding its reach to more communities, and training a substantial number of community health workers. But instead of getting recognition from the government, it has been a target of the military.

The Kalabaklabakan Mountain Clinic was established in 1974 by Fr. John Peterson of the Order of Franciscan Missionaries with the objective of meeting the basic health needs of the depressed barangays (villages) in Guihulngan. It is the second mountain clinic organized by the Franciscans. The first was established two years earlier in Barangay Banwage, Guihulngan city.

The Kalabaklabakan Mountain Clinic (KMC) has since functioned as a health center where people run to for health services. In the clinic, the people could avail of free consultations and medicines.

Barangay Trinidad, one of the barangays that is being serviced by the mountain clinic, is 33 kilometers away from the city. It can be reached through a 45-minute ride on a habal-habal (motorcycle) or a four-hour walk.

There is no functional health center in the barrio. The municipal health officer seldom visits the village. “Naanad na mi ana, layo man gud mi kayo,” (We are used to that, our place is very far away, that’s why) said one of the residents. 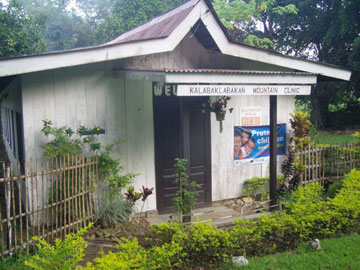 Since the KMC is being managed by a religious congregation, it is able to solicit the involvement of other church-related organizations such as the Basic Ecclesiastical Communities (BEC). The KMC is able to engage the services of trained Barrio Medical Aides (BARMA) who serve as health workers in communities, providing and delivering health services to those who need it.

Towards being a community-based health program

The CBHP, as a program, was initiated by the Rural Missionaries of the Philippines (RMP) in 1973. It was the response of progressive church people to the ill effects of Martial Law on the health situation of the people.

An integral part of the program is the training of community health workers (CHWs) at the barrio level. CHWs deliver primary health care, using a combination of western and eastern medicine in providing initial diagnosis and treatment of common illnesses. CHWs are trained to take vital signs, conduct physical examinations of patients, do minor surgery, acupuncture, reflexology and administer herbal medication among others. They also process referrals of patients requiring more intensive treatment to the center or to hospitals. But the most important function of CHWs is the prevention of diseases through health , sanitation, and nutrition campaigns.

Amy R. Tapales, a staff of KMC who has been with the center since it started, said that the CBHP has been instrumental in empowering communities by integrating health in all aspects of the development of peoples and communities. By getting the people involved in all issues confronting the community, its social, economic and physical development becomes more comprehensive and tangible, she added.

Amy or Mommy to the people in the community said that being with the KMC has helped her a lot as a person.

“I have learned so many things that is why I also give everything in return through the delivery of health care services to the people, even with the risks and threats I have experienced through the years up to the present,” said Amy

The KMC is now 34 years old. It has provided continuous health services to the people, expanding its reach to more communities, and training a substantial number of community health workers. But instead of getting recognition from the government, it has been a target of the military.

“The clinic has been raided a lot of times, the military has used our compound as their camp and we are, accordingly, in the army’s Order of Battle, just because we are providing health services to the people,” said Josephine Saguran fondly called as Nanay Sepin by the people, another staff who has been with the program since 1996.

Mommy and Nanay Sepin are one in saying that they feel the country is again under martial rule because of the massive deployment of AFP troops in the different mountain barangays in Guihulngan, including communities served by the KMC.

“Whatever their reason is for deploying this big number of troops in the area, one thing that is certain is that it is putting our health care delivery under threat. CHWs are no longer functioning as they are supposed to,” Mommy explained. She added that now, CHWs provide health services only to those who go to their houses. They could no longer go from house to house to monitor the health situation of each family in the community because of the constant threats and harassments they experience from military troops.

“The massive deployment of military troops in the area is definitely not bringing any good to the people; it only worsens our already impoverished situation,” Mommy Amy said. “All we want is to serve our community through delivering alternative health care services,” she added.

In spite of all that the KMC has been through and is still going through, Mommy Amy and Nanay Sepin have remained strong, dedicated, and passionate in their work.

“We will definitely go on. In standing up for our right to health we are in turn educating and inspiring the people to also stand up for their rights, especially now,” Mommy Amy said.

This year marks the 30th anniversary of the World Health Organization’s (WHO) International Conference on Primary Health Care (PHC), which was held at Alma-Ata, Kazakhstan. The conference, which was attended by 134 countries, adopted as its objective, the delivery of Health for All by the year 2000.

But as far as government responses are concerned, the situation in Guihulngan exemplifies the extent of the crisis of the Philippine health system and provides a glimpse of the reasons why the objective to bring health for all by the year 2000 failed. Contributed to (Bulatlat.com)