You Are Here: Home → 2008 → September → 12 → Fil-Ams Join Rally at Republican Convention to Call for End to US Intervention in RP

Filipino-Americans under the banner of the Bagong Alyansang Makabayan (Bayan-New Patriotic Alliance) USA chapter joined protesters from United for Peace and Justice (UFPJ), the Troops Out Now Coalition (TONC), Latinos Against the War (LAW), Iraq Veterans Against the War (IVAW), the American Indian Movement (AIM), the ANSWER Coalition, and various unions and labor groups during the Republican National Convention to call for an end to US intervention in the Philippines.

Kuusela Hilo, deputy secretary general of Bayan-USA, spoke before over 30,000 protesters to denounce US government intervention in the Philippines and to pressure the next US president to withdraw all forms of support to the US-backed regime of Gloria Macapagal-Arroyo.

Hilo also called for an ‘end to violent US-backed counter-insurgency in the Philippines, particularly in the southern 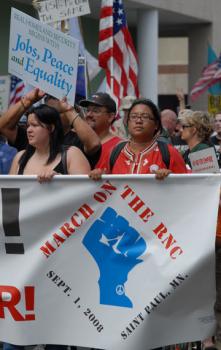 region of Mindanao, where US troops are believed to be engaged in unlawful armed combat with armed groups.’

The Philippines is the fourth largest recipient of US military aid in the world.

A 2007 US Senate hearing in Capitol Hill examined how US tax dollars have contributed to the intensified pattern of extra-judicial killings and abductions across the country, as well as the character of the joint military training conducted by both US and Philippine troops. Bayan-USA members were part of the broad 2007 campaign to pressure legislators to hold the hearing.

Hilo also paid tribute to the hardworking Filipinos in the United States, the second largest immigrant group, and challenged the US government to pass a humane, just, and comprehensive immigration reform bill.

After rallying for hours in front of the Minnesota State Capitol building in St. Paul, protesters marched to the Xcel Center, the site of the RNC.

Hilo marched side-by-side with representatives of the United for Peace and Justice (UFPJ), the Troops Out Now Coalition (TONC), Latinos Against the War (LAW), Iraq Veterans Against the War (IVAW), and the American Indian Movement (AIM).

Also present were the ANSWER Coalition and various unions and labor groups.

Demands printed on banners included US Out of Iraq Now; Money for Human Needs, not for War; and Peace, Justice and Equality for all.

With news of the approaching wrath of Hurricane Gustav on New Orleans’ Gulf Coast scaling down even George W. Bush’s attendance to the RNC, protesters marched in the tens of thousands undeterred, despite the violent brutality they met from the RNC’s security forces and local police.

Jess Sundin, representing the broad-based Coalition to March on the RNC and Stop the War, said, “We are here today, in the tens of thousands, because we refuse to be scared away [by police repression]. Because what we are marching for is too important to be silenced. Because this is the only way we can answer the Republican agenda, and demand and end to policies that wage war, deepen poverty, and fuel racism.”

Award-winning journalist Amy Goodman was one of the hundreds of marchers arrested during the opening salvo of the RNC protests. Goodman was thrown to the ground along with two of her Democracy Now producers after snagging a street interview with Hilo on the Philippine situation.

“Despite the fascism of the police, it was still a successful rally and march,” Hilo stated. “The two year battle to protest the RNC was well worth it. It was not just the hurricane deterring Bush from attending his own party’s convention. It was the political storm generated by the thousands of people descending on St. Paul from across the state, the country, and the world.” (Bulatlat.com)