How Can One Eat Siomai and Siopao When the Cooks Go Hungry?

Grabbing a hot steaming siopao and siomai at Kowloon for a quick take home meal has become a habit for hungry souls who are still awake during the wee hours of the morning. But those preparing our favorite siopao or siomai are not inside the all-too-familiar kiosk along West Avenue. They are outside waging a strike after being terminated from work for fighting for what is rightfully theirs: the paltry wage increases granted by the NCR Regional Wage Board. 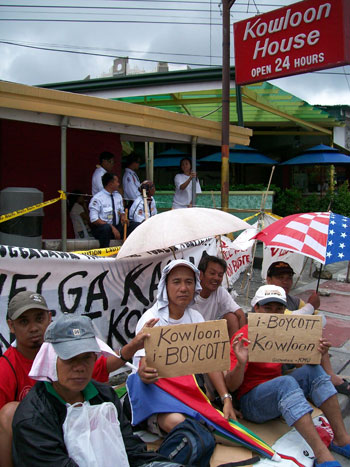 Most of them have been cooking good food for Kowloon Restaurant for more than a decade but they have tasted the bitterness of their employer.

The workers were only asking what was due to them, the implementation of Wage Orders no.13 and 14, but management refused even to talk with them. When they staged pickets during their breaktime on June 20 and 21, the management filed a case of “illegal strike” against them.

On Sept. 13, 73 workers were prevented from coming in to work. A security guard showed them a copy of the termination order issued by management.

Navarosa criticized the ‘collusion between the Kowloon management and the NLRC against the workers.’

He maintained that their June 20 picket could not be considered as an ‘illegal strike.’ “Walang paralysis, hindi namin hinarangan ang customers,” (There was no paralysis, we did not block the customers from coming in.) said Navarosa. The workers added that they joined the picket during their breaktime.

Navarosa slammed NLRC arbiter Aleman Mangandog for deciding hastily on the petition filed by the Kowloon management against them. The petition was filed in June; the NLRC issued its decision Sept. 12.

“Nakakadismaya ang hatol. Nagdepende lang siya sa picture ng piket, walang due process,” (The decision is infuriating. He depended only on the pictures of the picket; there was no due process.) said Navarosa. He added that they were not even summoned for investigation by the NLRC.

“Kami ang na-penalty sa halip na ang management,” (We are the ones who have been penalized instead of the management.) lamented Severino Gesto, secretary of the Kowloon Union.

Aside from the petition to declare their “strike” as illegal filed at the NLRC, Gesto said the management also charged them with illegal assembly before the Regional Trial Court in Quezon City.

Navarosa said they just wanted the management to hear their demands.

He said he wrote to the management several times asking for a ‘grievance meeting.’ The union has been asking for the implementation of the National Capital Region (NCR) Regional Wage Board Order No. 13 issued in August 2007; the order mandated a wage increase of P12 ($0.256 at an exchange rate of $1=P46.745) and an emergency cost of living allowance (ECOLA) of P50 ($1.069).

The union filed a notice of strike with the Department of Labor and Employment (DOLE) for non-implementation of the said wage order when the management refused to negotiate with them in spite of their repeated demands and picket. Before the DOLE ruled on their notice of strike, the National Conciliation and Mediation Board (NCMB) facilitated negotiations between management and the workers. It was only then that the management sat down with the union.

Navarosa said the management cited profit losses as the reason behind their non-compliance to the wage orders. The union said the workers’ total back wages can be paid by only 11 days of siopao sales, noting that the Kowloon sells 7,000 siopaos a day, which costs P47 ($1.005) each, among other products.

Navarosa said they did not expect that the management would also give them another P20 ($0.427) increase as stated in the RWB Wage Order No. 14 dated June 2008. “Iyon pala, huling sahod na naming iyon.” (It turned out it would be our last pay.)

“Balewala rin binigay nila, dismissed na kami,” said the union president. (What they gave meant nothing; we have been dismissed.)

The union filed another notice of strike with the DOLE, Sept. 15, citing union busting and unfair labor practices.

Navarosa said all of the 73 laid off workers are regular employees and union members. He said the NLRC decision is not yet final and executory. The union has filed an appeal.

There are also workers who were not terminated but have opted to join the strike.

Reynaldo Pulong, 59, has been working for the Kowloon restaurant for 39 years. Five months from now, he would turn 60 and will retire from work.

“Sumama ako alang-alang sa mga kasamahan ko,” (I have joined the strike for the sake of my co-workers.) said Pulong.

He described their employer as ‘sobrang malupit’ (too harsh). “Nagpiket lang kami, tinanggal na niya mga regular na manggagawa.” (We only had a picket and our employer terminated the regular workers just like that.)

While Gesto admitted their families are experiencing hardships since they launched their strike, he said, “Nasa tama naman kami.” (We are on the right side.)

Gesto said the management has hired 38 new security guards. The guards are posted in all entrances to the restaurant, preventing workers from blocking customers.

Navarosa said Quezon City policemen continue to violate the 500-meters-distance policy on workers’ picket lines. During the day of the interview, three policemen were inside the dining area of the Kowloon restaurant.

Another policeman went near the improvised kitchen of the workers. When he noticed this reporter was taking pictures, he immediately rode a jeepney along West Avenue.

The Kowloon workers appealed to the public to boycott Kowloon restaurant in the meantime.

Gesto said that since the chief cook has joined the strike, the food at Kowloon would not taste good. More importantly, Gesto said the support of the public is vital to their struggle for survival of the workers. (Bulatlat)