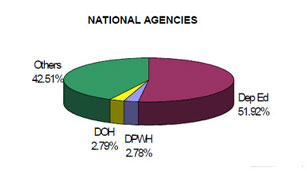 The same document shows that local government units (LGUs) have the biggest number of non-career personnel, employing 101,487 or 63.6 percent of all non-career employees.

Of this number, 72,720 are employed through patronage politics, said Gaite.

A few in the GOCCs

Meanwhile, the government-owned and controlled corporations (GOCCs) employ only 17,308 non-career personnel, which comprise 16.6 percent of the total number of employees. This is 20 percent less than their 1999 non-career employment figure of 21,732.