The progressive alliance of government employees, teachers and health workers—the All Government Employees’ Unity—assailed Joint Resolution No. 24 or the Salary Standardization Law Part 3 which was proposed by Budget Secretary Rolando Andaya Jr. and was endorsed in the 14th Congress by House Speaker Prospero Nograles, saying it is divisive and deceptive.

Last Sept.5, during the deliberation for the 2009 National Budget, Budget Secretary Rolando Andaya Jr. told the legislators that the Department of Budget of Management (DBM) is allocating P20 billion ($415.02 million at the Nov. 7 exchange rate of $1:P48.19) for the salary increases of all government employees, including high ranking officials in the government.

As support for the DBM move, House Speaker Prospero Nograles Jr., a close ally of the President, on Sept. 16 adopted Joint Resolution No. 24, amending Republic Act No. 6758 or the Salary Standardization Law of 1994.

However, Joint Resolution No. 24 wasn’t received with open arms by the state workers themselves. Their criticism: it nails the ordinary employee in penury, divides their ranks, and it only favors the already “favored class.”

More for the full, less for the empty

“The Joint Resolution No. 24 or the Salary Standardization Law 3 (SSL 3) of Andaya and Nograles makes the gap between the lowest and highest paid employees even wider. For the Salary Grade 1, Step 1 employees, they only get a measly 30.1 percent increase while those in the higher positions get 100 to 142 percent increases,” he explained.

Among the recipients of the huge percentage of increase are the Chief Executive (President of the Republic) and legislators, aside from department secretaries and undersecretaries, attached and line agency and bureau directors, and division chiefs. 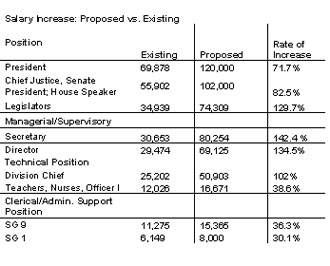