Parichat Jaroennon is a Thai national who has been working as a domestic helper in Hong Kong for more than 18 years.

Jaroennon said their work has no limit. “We are on call for 24 hours.” They only have one day to rest. They stay at their employer’s house and usually work on the basis of a two-year contract.

The minimum salary of domestic workers in Hong Kong is 3,580 Hong Kong dollars (HKD), way below the average salary of Hong Kong citizens, which is pegged at 7,000 HKD.

Since 2003, they have been made to pay a levy to the Hong Kong government amounting to 400 HKD.

They eat food provided by their employers. Jaroennon said she learned to like Chinese food because Thai food is quite expensive in Hong Kong.

Despite working for so long in Hong Kong, Jaroennon said she and the other foreign workers could not aspire for citizenship. “The only way is to marry a citizen.”

Based on the Hong Kong’s two-week rule, any foreign worker without legal papers faces deportation. Jaroennon said it usually takes one month before they can find a new employer.

Jaroennon, the vice chairperson of the Thai Regional Alliance and a member of the Asian Migrants Coordinating Body (AMCB), said they are campaigning for the permanent abolition of the levy and for the junking of the two-week rule.

“Foreign brides” also face discrimination and other forms of abuse.

Man-Chi Hong, a Vietnamese married to a Taiwanese for ten years, shared the experience of Southeast Asian women married to Taiwanese men. She is a member of the TransAsia Sisters Association (TASAT).

Hong said marriage brokers treat women as commodities. She showed advertisements of women labeled as virgin and fertile published in Taiwanese dailies and a photo of one matchmaking meeting.

Hong said marriage migrants are stigmatized as persons stealing jobs, money and men. Even as they contribute to the economy of the host countries, they are often discriminated against. 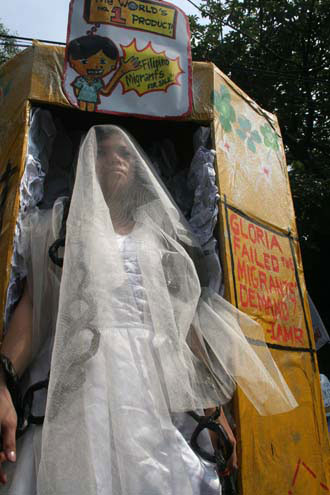 Hsiao-Chuan Hsia, head of organizing committee of TASAT and associate professor at the Graduate Institute for Social Transformation Studies of the Shih Hsin University said “foreign brides” provide unpaid household labor, child bearing and child-rearing, thereby stabilizing the reproduction of a pool of cheap labor. They also send remittances to their families in their home countries.

Hsia said that marriage migration has become another significant form of forced migration for women under globalization. She said, “The general trend is almost parallel with labor migration, women from poorer countries migrate to richer countries through cross-border marriages.”

Hong said marriage migrants need to stand up and organize themselves for their welfare and rights.

While forced migration in most poor countries began in the 1970s and 1980s, Mongolia’s experience is different.

Undarya Tumursukh of the Asia-Pacific Forum on Women, Law and Development’s (APWLD) Labor and Migration Taskforce said that Mongolia’s international migration began in 1990.

Before, under the socialist dictatorship of the Soviet Union, Mongolian people had guaranteed education, health, jobs, social welfare and security.

Since the loss of Soviet control and Soviet “assistance” equivalent to 30 percent of the gross domestic product of Mongolia, liberalization of the economy followed suit. Structural adjustment programs led to the shrinking of social welfare and protection, said Tumursukh. As a result, unemployment, underemployment and poverty spread.

Tumursukh said people started fending for themselves and migration began.

According to government figures, there are 120,000 Mongolian citizens who migrated to other countries. The top three destinations are South Korea, 35,000; United States of America, 22,000; and, Czech Republic, 11,000. Others are found in the United Kingdom,
Kazakhstan, Germany, Japan, China, Singapore, Hungary, among others.

Based on a 2005 study, most Mongolians in the US, UK, Czech Republic and South Korea are irregular migrants.

Most of them are found in sewing factories in Czech Republic and South Korea, and assembly lines in South Korea. They are also domestic workers, nurses for old or sick people or cleaners in the US.

Tumursukh said that they work for long hours and no breaks. In Czech Republic, 76 percent work for 40 or more hours a week. In sewing factories, women suffer poor working conditions – without ventilation and no safety standards. They also face harassment and discrimination by co-workers.

Remittances from women migrants are consistently less than men: $9,502 in South Korea, $925 Czech Republic, $7,554 in the US, in 12 months before the study. Tumursukh said that money is overwhelmingly spent on daily needs of families, some to service debt and some to education.

In Czech Republic, women earn $419 on the average, only half of the men’s income.

Tumursukh said persistent wage gaps between men and women show structural discrimination against women and devaluation of women’s labor. “Economy and society are structured so that only certain jobs are open to women, so women are pre-selected for the low paying, under-valued jobs.”