Citing the Philippine government’s lack of a genuine program to address climate change and mitigate its impact on the Filipino people, and the failure of the Kyoto Protocol, a newly-formed alliance called the Philippine Climate Watch Alliance is calling on developed countries and TNCs to reduce their carbon emissions by 50 to 90 percent in the next three decades. It is also calling on the Arroyo government to stop its mining revitalization program, the fossil fuel development projects, and other highly extractive industries that compound the problem of climate change. In stead it proposes for a massive forest rehabilitation and protection program, and a strategic energy plan.

Meggie Nolasco national spokesperson of the PCWA said that the Philippines is among the developing countries that is most vulnerable to the impact of global warming, citing the global scientific consensus and the recently-released Fourth Assessment Report of the Intergovernmental Panel on Climate Change (IPCC). 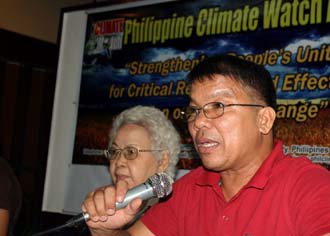 Willy Marbella (R) of Kilusang Magbubukid ng Pilipinas speaks during the launching of the PCWA. Beside him is Dr. Helen Mendoza (Photo by Arkibong Bayan)

Established in 1988, the IPCC is an intergovernmental scientific body set up by the World Meteorological Organization (WMO) and by the United Nations Environment Programme (UNEP). Its task is to provide decision-makers and others interested in climate change with an objective source of information.

Climate change is defined as a long-term significant change in the “average weather” that a given region experiences. Average weather may include average temperature, precipitation and wind patterns.

“The recent tragedies caused by super typhoons that have killed thousands of people and the record-breaking temperature extremes during the past ten years are deemed part of the effects of global warming on the Philippines,” said the PCWA in its unity statement.

Nolasco, however, said “..the present government and its agencies are making our country ill-equipped to respond to the impact of climate change by not pursuing comprehensive policies and programs to respond to the problem.”

Nolasco said that the Department of Energy (DOE) and Department of Environment and Natural Resources (DENR) continue to increase emissions of national green house gases (GHG) by implementing programs and projects, which result in unprecedented pollution and environmental destruction.

She cited as examples the mining revitalization program, the fossil fuel development projects, and other highly extractive industries that compound the problem of climate change.

The PCWA slammed the Arroyo administration for the absence of a genuine program to mitigate the impact of climate change and to help the Filipino people to adapt to the effects of global warming.

The Conference of Parties (COP) under the United Nations Framework Convention on Climate Change (COP) is nearing its final leg of negotiations for the establishment of a post-Kyoto Protocol global agreement on climate change. The COP 14 will be held on December 1 to12, 2008 in Poznan, Poland.

The Kyoto Protocol, a landmark international agreement on climate change, came about in 1998. It targeted to reduce global carbon emissions in 2012 by 5.2 percent compared to 1990 levels. It also introduced market-based and profit-oriented mechanisms such as carbon trading and the Clean Development Mechanism (CDM) to reduce carbon emissions of countries and corporations.

The PCWA said that after a decade of implementing the agreements, the Kyoto Protocol still failed to reduce global carbon emissions. The alliance maintained that private corporations, most especially transnational corporations (TNCs) have manipulated such mechanisms to continue emitting GHG to the environment.