Human rights groups and people’s organizations marked the 60th year of the Universal Declaration of Human Rights (UDHR) not with a celebration but with protests across the country and overseas.

Human rights groups and people’s organizations marked the 60th year of the Universal Declaration of Human Rights (UDHR) not with a celebration but with protests across the country and overseas.

In Manila, members of Karapatan (Alliance for the Advancement of People’s Rights) and groups allied with Bagong Alyansang Makabayan (Bayan) marched from Welcome Rotunda to the Chino Roces (formerly Mendiola) bridge, December 10. Some 200 elements of the Western Police District (WPD) blocked the protesters at the corner of Recto Ave. and Morayta st.

Families of victims of human rights abuses were at the frontlines. Erlinda Cadapan and Concepcion Empeño, mother of missing University of the Philippines (UP) students Sherlyn and Karen; JL Burgos, brother of missing activist Jonas; Evangeline Hernandez, mother of slain campus journalist and human rights defender Benjaline, among others, joined the protest. 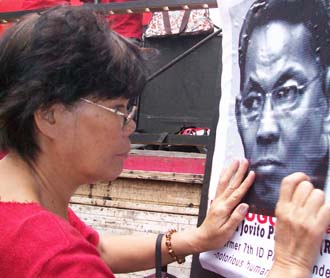 Erlinda Cadapan, mother of missing UP student Sherlyn, posts on a board a picture of Ret. Gen. Jovito Palparan with the label “Berdugo ng Bayan” (Butcher of the Nation). (Photo by R. Olea)

Hernandez, convenor of Hustisya, a group of survivors and families of victims of human rights abuses said, “The basic rights to life and dignity are violated under Arroyo’s Oplan Bantay Laya II, which the military implements to suppress government critics.”

In its 2008 human rights report, Karapatan said 50 members and leaders of people’s organizations and party-list groups have been killed from January to October this year, bringing the total number of killings under the Arroyo administration to 977.

The group also said that during the same period, seven were forcibly disappeared, 22 were abducted, 53 were tortured and 138 were illegally arrested.

Marie Hilao-Enriquez, Karapatan secretary general, said not one of the perpetrators of extrajudicial killings and enforced disappearances has been credibly punished. She pointed to the elements of the AFP as the top abusers of human rights.

Continente was referring to the criminal charges filed against 72 activists in Southern Tagalog for allegedly participating in a raid by the New People’s Army in Mindoro Oriental and the charges of arson, conspiracy to commit rebellion and destruction of property filed against 32 individuals. Six of the 72, including labor lawyer Remigio Saladero Jr., have already been arrested and detained at the Calapan City District Jail.

Activists from Southern Tagalog held a picket protest in front of the Department of National Defense (DND) before joining the contingent in Manila.