You Are Here: Home → 2008 → December → 13 → Rally Organizers to Mount Bigger Mobilizations Against Cha-Cha

“The protests could grow bigger and bigger if Arroyo and her allies ignore the message of the Charter change opponents and continue to push for their scheme,” said Bayan Muna Rep. Teddy Casiño.

The sky all day threatened to bring heavy rains, but this did not prevent thousands of protesters from piling up at the intersection of Ayala Avenue and Paseo de Roxas in Makati City for a rally against Charter change, or “Cha-cha”, on Dec. 12. Protesters coming from all walks of life and across the political spectrum showed up for what was the biggest anti-government rally since the February and March demostrations against the National Broadband Network (NBN) deal between the Philippine government and China’s ZTE Corporation. 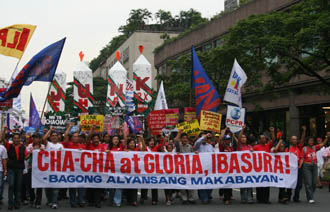 Members of the Bayan contingent march toward the Ayala ave. in Makati City, Dec. 12 (Photo by R. Olea)

“This (kind of unity) is significant,” said Bayan Muna (People First) Rep. Teddy Casiño in an interview. “It shows that there is a wide range of forces and movements opposed to Gloria Macapagal-Arroyo’s scheme (to amend the Constitution). This should serve as a fair warning to Gloria and her allies not to push for Cha-cha. We can now see how broad the opposition will be if they continue to push Charter change.”

“This unity from all sectors – politicians and non-politicians, religious and non-religious – is tantamount to watering the seeds of awareness, seeds of rage, that have been sowed in the people against what (Arroyo and her allies) are doing,” said Rodolfo “Jun” Lozada, NBN scam star witness, in a separate interview.

“The Filipino people, even the entire Philippine Senate, are opposed to Charter change,” Bayan chairperson Carol Araullo said at the rally. “It should send a clear message to Mrs. Arroyo and her allies that it is time to quit moves to revise the Charter and extend her term in office.”

“Arroyo’s tactic is to divide and rule, but tonight, we have shown that we are united,” said United Opposition spokesman Adel Tamano, who is also president of the Pamantasan ng Lungsod ng Maynila (PLM).