At first glance, they looked like ordinary children. But deep within them are scarred souls and lost innocence because they are children-victims of human rights violations. On December 9, they went to see the United Nations (UN) Secretary General’s Special Representative for Children in Armed Conflict Radhika Coomaraswamy to tell her their tragic stories.

Seventeen-year old Jerome (not his real name) comes from Prosperidad, Agusan del Sur. On March 23, 2007, at around 9 a.m., Jerome and his five cousins were on their way home from a nearby village when they heard gunfire. They immediately ran for cover.

When the gunfire ceased, they came out from hiding. Jerome said he saw soldiers armed with long rifles, three 6 x 6 military trucks and an armored personnel carrier. The soldiers belong to the 29th Infantry Battalion of the Philippine Army (IBPA).

The soldiers asked Jerome and his cousins where their firearms were. All of them said they did not have any gun. The soldiers told them, “Hindi, mga NPA talaga kayo.” (No. You are really members of the New People’s Army.)

Jerome related, “Natatakot ako, umiiyak ako.” (I was so afraid; I was crying.)

He said the soldiers repeatedly asked them questions like: “How long have you been in the service as NPA fighters?” “Who are your companions?” “What are the names of your comrades?”

Jerome said they insisted that they are not members of the NPA. The boy explained to the soldiers that he was just helping his parents in the field.

Jerome quit school after finishing Grade 3 to help in the farm.

Jerome and his cousins, all of whom are minors except one, were brought to the headquarters of the 29th IB and detained there for almost two weeks. 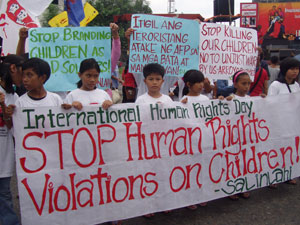 The children’s families only learned about their arrest when notified by a tricycle driver. Their parents immediately went to the military camp but the children were not released to them. Jerome said his mother was crying while pleading for his release but the soldiers refused to set him free.

On March 27, five of the children, including Jerome, were presented to members of the local media in Cagayan de Oro City. They were introduced as child soldiers of the NPA. He said the soldiers placed long firearms, materials for making a land mine and medicines on the table in front of them.

Again, Jerome and the children told the media they are not child soldiers and they know nothing about the NPA.

The next day, the children were brought to Manila for a press conference.

Jerome could not identify the exact location but said he saw several policemen and members of the media. They were presented as child soldiers of the NPA who were arrested by the military.

Again, the children said they are not NPA fighters. He related that members of the media and the soldiers just laughed at them because they could not speak fluently in Tagalog.

They were released to their parents only on April 2.