Despite being slapped with libel charges, Antonio Tinio, chairperson of the Alliance of Concerned Teachers (ACT) said his group will continue to expose what they deem as ‘exploitative and illegal’ policies of the Government Service Insurance System (GSIS) under the leadership of Winston Garcia.

In November last year, Antonio Tinio, chairperson of the Alliance of Concerned Teachers (ACT) received subpoenas from the Office of the City Prosecutor in Pasay City. He has been charged with five cases of libel.

All the charges were filed by Winston Garcia, president and general manager of the Government Service Insurance System (GSIS). The GSIS is a social insurance institution for government employees.

All of the cases refer to Tinio’s statements criticizing the GSIS’ sale of its Manila Electric Company’s (Meralco) shares to San Miguel Corporation (SMC).

Quoted by at least three newspapers, Tinio said the action of Garcia – who sits as member of the SMC board, is “inimical to the interest of teachers who stand to suffer from the bargain sale of Meralco shares payable in three years without interest.”

Tinio said that Garcia played double, yet conflicting, roles in the transaction. He was on the board of both the seller (GSIS) and the buyer (SMC).He said further that since Garcia sits on both boards he could be suspected of handing over the Meralco shares to SMC on a silver platter.

The ACT leader said Garcia’s earlier decision to invest big time in foreign and local stocks has proved “disastrous” and “ill-timed” with the GSIS members ending up at the losing end of those transactions. 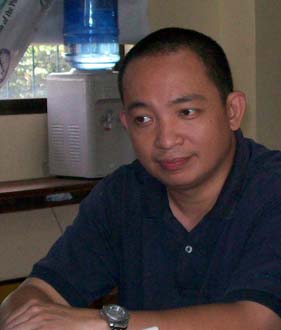 Antonio Tinio, president of the Alliance of Concerned Teachers, is undeterred by the libel suit filed against him by GSIS President and General Manager Winston Garcia.

Also charged with libel are columnists who tackled the GSIS-SMC deal and who quoted Tinio.