A new coalition has been formed to counter the dirty and traditional politics in the country. It has pledged to advance the politics of change and promote a ‘pro-people’ platform for the 2010 elections.

Ocampo said the same politics of change was advanced by Partido ng Bayan (People’s Party) in 1987 and has been advanced by Bayan Muna since 2001.

Ocampo said that while the progressive party-list groups in Congress have achieved victories in the last three elections, the space provided for them remains narrow. “Kung magpapakasya tayo roon, mananatili tayong maliit na minorya sa bilang,” (If we limit ourselves to this, we will remain a minority in number.) he told the audience.

Through Makabayan, Ocampo said, more progressive candidates will run for municipal and even national positions. 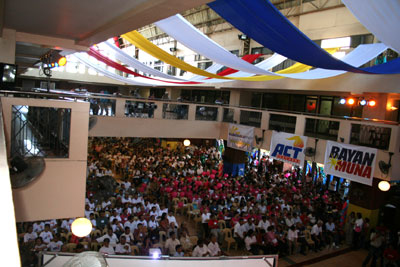 Ocampo added that Makabayan will work with local leaders who have stood up against dirty and traditional politics. He cited Pampanga Gov. Ed Panlilio and Isabela Gov. Grace Padaca. “Naghahanap sila ng mga kapanalig…upang isulong ang kilusang pagbabago.” (They are looking for partners …to advance the movement for change.)

Ocampo also said that Makabayan’s politics of change is in harmony with Supreme Court Chief Justice Reynato Puno’s moral force. Makabayan, Ocampo said, aims to provide a channel for transformational leaders being sought for by the Chief Justice.

Makabayan’s general platform for the 2010 elections includes fighting for people empowerment, transparency and accountability in governance, uplifting the lives of the poor, developing a strong and self-reliant domestic economy, a more equitable distribution of wealth, saving the environment, defending the country’s sovereignty, upholding human rights and pursuing a just and lasting peace.

In his speech, Anakpawis (Toiling Masses) Rep. Rafael Mariano described Makabayan as“isang koalisyong nakatuntong at nagsusulong sa mga mithiin, tagumpay at kalakasan ng kilusan ng mamamayan at ng kanilang partidong pampulitika” (a coalition that is founded on and advances the aspirations, victories and strengths of the people’s movement and their political parties).