Members of workers’ groups and other cause-oriented organizations came in their thousands, from all over Metro Manila and adjacent provinces, to mark Labor Day by denouncing the US for causing the country’s current economic troubles and demanding for job security and temporary relief. They also reiterated their demand for a legislated wage hike, which was first put forward in 1999.

Members of workers’ groups and other cause-oriented organizations came in their thousands, from all over Metro Manila and adjacent provinces, to mark Labor Day by denouncing the US for causing the country’s current economic troubles and demanding for job security and temporary relief. They also reiterated their demand for a legislated wage hike, which was first put forward in 1999.

“We demand jobs, not retrenchments,” said Joselito Ustarez, vice chairman of the Kilusang Mayo Uno (KMU or May 1st Movement).

Tens of thousands of workers all over the country are reported to have lost their jobs since September 2008 amid the global economic crisis, which has severely affected the Philippines as a result of its neocolonial ties with the US.

Earlier this year, Labor Secretary Marianito Roque had predicted that some 300,000 workers in the Philippines are expected to lose their jobs this year alone, while projections by Economic Planning Secretary Ralph Recto warned of the displacement of around 800,000 workers. A recent estimate from the National Wages and Productivity Commission (NWPC) forecasts that as many as a million workers would be laid off this year. 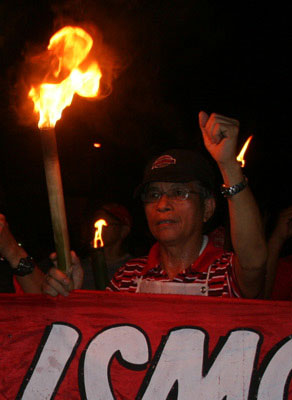 “We are also demanding for a P125 across-the-board, nationwide wage increase, contrary to what Malacañang tells us that workers should not demand a wage increase because of the crisis,” Ustarez said. “In this time of worsening crisis, it is the capitalists who should bear the burden and make sacrifices. It should not be the case that the workers are always the ones to make sacrifices. During the times when they amass profit, the capitalists never take the workers’ conditions into consideration. Now that there is a financial crisis, it is timely and imperative that they prioritize workers’ interests.”

Before daybreak, a number of them had staged a torch parade at the Welcome Rotunda, the boundary between Manila and Quezon City.

This action was followed at around 10 a.m., five hours later, with a lightning rally at the foot of the Don Chino Roces Bridge – a few steps away from the presidential palace.

At 1 p.m., the activists gathered at various converging points throughout Manila: Calle Moriones in Tondo, near Plaza Moriones; Blumentritt Road cor. Dimasalang Street; Quirino Avenue; and España Street, in front of the University of Santo Tomas (UST) – with the crowd at UST comprising the main component. They held simultaneous programs before marching to the Liwasang Bonifacio at around 3 p.m.

As they marched to the Liwasang Bonifacio, the protesters from UST filled up Quiapo’s Quezon Boulevard. The crowd’s rear was still at Nicanor Reyes Street by the time the frontline reached the Quiapo Church. Chants of “Itaas and sahod – siyento bente singko!” (Increase salaries by P125!) reverberated as the crowd marched, joined in the chanting by a number of onlookers.

At the Liwasang Bonifacio, speakers from various sectors took turns in denouncing the Arroyo government for its subservience to US imperialism, and for its neglect of the people’s plight.

“Unjust and deliberate retrenchments, slashing of wages and work shifts, and institutionalization of flexible labor schemes have become the worst epidemic ever as it has already destroyed the lives of millions throughout the world,” said KMU chairman Elmer “Bong” Labog.

“It was the big businesses mainly from the US that have created the economic crisis outbreak, and made workers bear the brunt of it to ensure their continued profiteering,” Labog added. “Thus, Labor Day becomes all the more relevant to all because to defend the cause of the workers – for job security, better wages and living conditions – is to champion the interests of the majority…”