On His 1st Death Anniversary, ‘Ka Bel’ Honored as ‘Man of the Century’

By CHARMAINE LIRIO and GLAIZA MAY MUZONES
Bulatlat

QUEZON CITY, Philippines – Farmers and workers gathered today at the main gate of the House of Representatives to pay tribute to the late Rep. Crispin “Ka Bel” Beltran of Anakpawis.

Beltran died exactly one year ago from severe head injuries after he fell off the roof of his home in Bulacan. He was plugging leaks of the roof when the accident happened. He was 75. 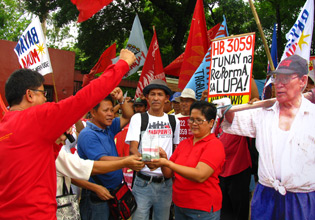 [flashvideo file=https://www.bulatlat.com/wp-content/uploads/audio/2009/06/06/ofelia_beltran.mp3 height=75 width=302 /] Listen to speech of Ofelia Beltrab, Ka Bel’s daughter, accepting the “Man of the Century” award on behalf of her father. (Photo by Glaiza May G. Muzones / bulatlat.com)

As part of the commemoration of Beltran’s first death anniversary, KMU, Bayan Muna (People First), Kilusang Magbubukid ng Pilipinas (KMP or Peasant Movement of the Philippines), Anakpawis (Toiling Mases), Amihan and other regional groups gave him a plaque of recognition, dubbed Gawad Kanayunan, honoring him as “Man of the Century.” The plaque was accepted by his daughter Ofelia Beltran-Balleta.

The groups also remembered Beltran as a simple man from Albay, a good husband and father, and a brave representative of the masses.

Alongside the celebration, the groups also called for the passage of the Genuine Agrarian Reform Bill and the P125 wage increase bill. Both bills were filed by Beltran.

At the age of 14, Beltran was already working in the fields. He was, however, forced to go to Manila because of poverty, Balleta said.

In Manila, Beltran became a messenger, janitor and a taxi driver. As a taxi driver at 23, he led the Amalgamated Taxi Drivers Union.

He was imprisoned during martial law and during Arroyo’s “State of Emergency” in 2006.

Beltran was elected Anakpawis representative in 2004 and authored several bills for the farmers’ and workers’ sectors. He also endorsed several impeachment complaints against President Gloria Macapagal-Arroyo.

He was awarded Most Outstanding Congressman from 2002-2005 and was a member of the Congressional Hall of Fame. (Bulatlat.com)