Victims of Harassment Suits Express Their Anger, Vow to Pursue the Fight

MANILA –“Where is our country headed? Why is it that what is right is being viewed as wrong? What is wrong is made to appear right?”

Rez Cortez, the actor who usually plays the role of villains in local movies, tearfully uttered those words at a forum organized by Pagbabago! People’s Movement for Change on May 21 at the University of the Philippines in Diliman, Quezon City.

“I have been a villain in films, and this administration is trying to make me appear as a villain in the eyes of my country.”

Cortez is facing charges of serious illegal detention. The charges stemmed from the exposé of the so-called Hello Garci tapes, or the wiretapped conversations between a woman who is believed to be President Gloria Macapagal-Arroyo and a former elections commissioner, widely believed to be Virgilio Garcillano. Cortez and Sammy Ong, a former agent of the National Bureau of Investigation who recently died of lung cancer, were accused of detaining Sgt. Vidal Doble, an intelligence agent believed to be the source of the tapes, at the San Carlos Seminary in Makati City in 2005.

At a recent forum, actor Rez Cortez (shown in the video above), lawyer Remigio Saladero Jr. and NBN-ZTE scam star witness Rodolfo “Jun” Lozada narrate what they went through in the hands of the Arroyo regime. “What they did to us is terrible,” one of them said. But they vowed never to give up in their quest for truth and justice.

On June 6, 2004, Ong presented to the media the “mother of all tapes” that he said were evidence of systematic electoral fraud by the Arroyo clique. The tapes are allegedly a master copy of those wiretapped conversations.

In 2005, Ong and Cortez were slapped with the illegal detention charges, but these were dismissed by a Makati Regional Trial Court. In April this year, the Court of Appeals reversed the lower court’s decision, reviving the charges against the two. A warrant of arrest has been issued. Cortez’s lawyers filed a petition for the temporary lifting of the warrant.

Cortez broke into tears when he talked about Ong at the UP forum. He visited Ong at the Chinese General Hospital recently, days before Ong died. “I felt said seeing the once proud Sammy Ong, who bravely exposed the truth about the cheating during the 2004 elections, bereft of color, looking like he was already dead. It was a depressing sight to behold. Then I realized that this is what happens to those who muster the courage to fight for the truth,” he said in Filipino. 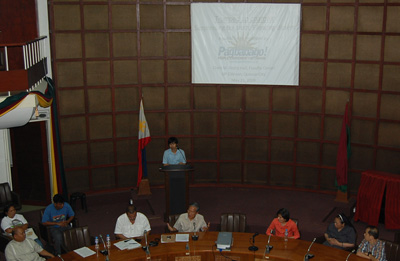 Pagbabago! forum in UP Diliman. (Photo by Ayi Muallam)

Cortez said the case has affected his work and his family. He admitted that he had thought of giving up the fight. Closely identified with the late Fernando Poe Jr., the closest rival of Arroyo in the 2004 elections, Cortez has been a familiar face in anti-Arroyo protest actions.

He described himself as someone who used to be apolitical, someone who did not care. Since he got involved in the 2004 electoral campaign, Cortez said he realized he had to do something. He thought to himself, “Perhaps it is time that I looked at what is happening in our country…We should all get involved.”

Cortez criticized Justice Secretary Raul Gonzalez who, he said, is the one behind the filing of the case against him. He recalled what Gonzalez had told him when they met: “So you are Rez Cortez, one of the destabilizers.”

Cortez said he draws strength from his children. “Dad, continue the fight. We support you. Do not give up,” one of them told him.

Like Cortez, Rodolfo “Jun” Lozada, decried the so-called harassment suits filed against him.

Lozada, the star witness in the bribery and corruption surrounding the $329-million National Broadband Network deal with ZTE of China, was charged with perjury by President Gloria Macapagal-Arroyo’s former chief of staff Mike Defensor. Lozada was arrested on April 29 and imprisoned at the Manila City Jail until the Metropolitan Trial Court Branch 26, on May 7, decided to turn him over to the Senate’s custody.

Besides the perjury case, Lozada has been slapped with 15 other charges, including theft, gross negligence and dishonesty.

“It’s good that nuns have been my companions. Otherwise the government might file rape charges against me,” Lozada said, drawing laughter from the crowd.