10 Years On, VFA Only Served US Interests

Has the VFA served its avowed purpose? Or has it only reinforced the unequal alliance between the Philippines and the United States, a relationship so tilted in the Americans’ favor that to call the VFA an agreement — with all the word’s connotation of equal rights, benefits and privileges — would be a travesty?

MANILA — On May 27, 1999, the Philippine Senate passed the Visiting Forces Agreement (VFA) between the Philippines and the United States. Then president Joseph Estrada soon after signed the agreement.

The VFA grants extraterritorial and extrajudicial “rights” to US servicemen visiting the Philippines. It made possible the Balikatan military exercises, which have been held annually since 2002.

In the VFA’s preamble, it is stated that both parties reaffirm “their obligations under the Mutual Defense Treaty of (Aug.) 30, 1951” and that each side should assert their independence as they see fit. In other words, the VFA, on paper, preaches parity and mutual respect.

In practice, however, the picture is entirely different so that, a decade after it took effect, some questions emerge: Has the VFA served its avowed purpose? Has it served the interests of Filipinos? Or has it only reinforced the unequal alliance between the two countries, a relationship so tilted in the Americans’ favor that to call the VFA a treaty — with all the word’s connotation of equal rights, benefits and privileges — would be a travesty?

Even as it was still being deliberated upon in the Senate, the VFA had its own share of critics. And the past 10 years have served only to vindicate those who opposed the agreement, said Bagong Alyansang Makabayan (Bayan or New Patriotic Alliance) chairperson Dr. Carol Pagaduan-Araullo. 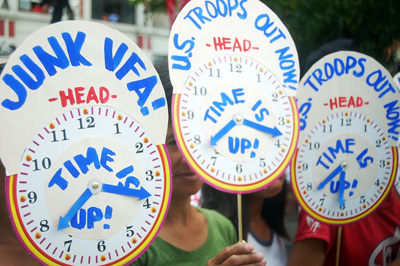 “On one hand, it appears that everyone who raised objections, criticisms, projections of what could happen against the interest of ordinary Filipinos and national sovereignty were vindicated,” Araullo said in an interview with Bulatlat. But this vindication, she quickly pointed out, “does not make us happy.”

Because the VFA, Araullo said, “has meant farmers whose livelihood was destroyed, fishermen whose boats were hit by bombs, women who were raped – dishonor for the Philippines.”

The Philippines, she added, is supposed to be an independent and sovereign country and yet it “cannot even assert the authority of the court over convicted felons like Lance Corporal Daniel Smith, cannot assert a breakthrough within our criminal justice system for rape.”

Smith, a US Marine, had been convicted by a local court for the rape of “Nicole” in Subic, Zambales, in 2005 but the Court of Appeals overturned the conviction early this year. Apart from the “Nicole” rape case, other atrocities by US troops have taken place in areas where the Balikatan military exercises have been held, among them the shooting of farmer Buyong-Buyong Isnijal in Basilan in 2002. Early this month, another woman, “Vanessa,” came out to accuse another US serviceman, purportedly assigned with the Joint Military Action Group (Jusmag) and Balikatan, of rape.

“The Arroyo regime has shown its utter subservience to US interests when it caused the acquittal of a previously convicted US soldier,” said Bayan secretary-general Renato M. Reyes Jr. in a statement on Wednesday. “Arroyo is now hoping to reap the rewards of her subservience when she meets with US Defense secretary Robert Gates on May 31. She’s banking on increased military aid for her repressive regime.” 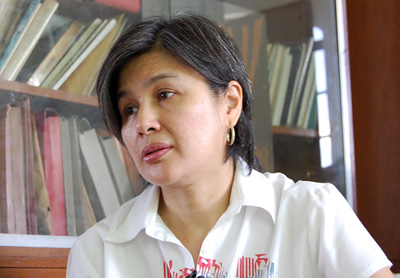 Araullo: Vindicated but not happy about it.
(Photo by Ayi S. Muallam/bulatlat.com)

Reyes cited the case of the Joint Special Task Force Philippines based in Camp Navarro in Zamboanga City. This task force “hosts a rotating batch of US troops of around 200-300 soldiers who are ever present in the province.”

He also pointed out that the recent AH1N1 flu crisis highlighted one of the basic defects of the VFA: American soldiers can be exempted from health inspections by Philippine health authorities when they enter the country. “Under the VFA, it is the US commander who issues a health status for the US soldiers,” effectively undermining local health policies, Reyes said.