10 Years On, VFA Only Served US Interests

Roland Simbulan, a professor of development studies at the University of the Philippines (UP) in Manila and an expert on US-Philippine relations, believes that the last 10 years of the VFA have been used for purposes other than what the agreement was designed for.

“The purpose of the Visiting Forces Agreement was to provide joint military training for both US and Philippine Army personnel,” he told Bulatlat in a separate interview. “But I think that the way it has been used in the Philippines, the VFA has actually been merely used as a camouflage to do certain activities (that are) not within the boundaries of the Visiting Forces Agreement – (for) example, the direct involvement of US military personnel in counter-insurgency through intelligence, covert operations, as well as other activities that are in direct assistance to (operations related to) the internal conflict in the Philippines, or it has also been used especially for hiding other activities related to our relations with other countries, like for example the use of our territory as a springboard for military operations against other countries.” 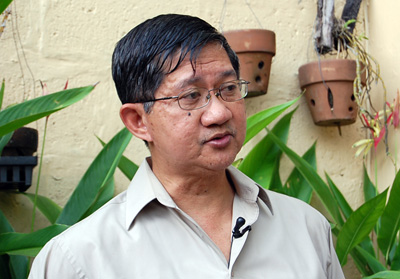 Simbulan: All the Philippines got from US are junk. (Photo by Ayi S. Muallam/bulatlat.com)

These activities, Simbulan said, “are not within the bounds of the Visiting Forces Agreement. But for the past 10 years, that is how this agreement has, in fact, been used – to try to legalize, at the same time cover, covert activities by US forces in support of the so-called US ‘war on terror’.”

Simbulan pointed out that “the first units of the US Special Operations Forces that were deployed here were referred to as Operation Enduring Freedom-Philippines, while in Afghanistan, after 9-11, the US forces deployed there, the Special Operations Forces, were called Operation Enduring Freedom-Afghanistan. So there’s a similarity, and we know what these forces were for, and they used the legal cover of the Visiting Forces Agreement to hide, if not camouflage, these activities which are related to US military intervention here in the Philippines as well as against other countries.”

According to Araullo of Bayan, US military presence in the Philippines is not in the interest of the Filipino people. But the Americans are here for their interests in East Asia and the Asia-Pacific region, she said.

Simbulan agreed, saying the VFA has instead served to further US geopolitical interests in Asia and the Pacific.

“After the pullout of US military bases in 1992, after the Senate rejected the proposed bases treaty, the United States wanted a restoration of their presence here, their military presence, because by virtue of our strategic location – the Philippines is at the gateway between the Indian Ocean and the Pacific Ocean – our location gives the United States a presence that is used as a springboard for their operations in other countries, as well as a monitoring station, especially against the people of Indonesia and Malaysia, which are Muslim countries. The US is afraid to deploy US forces there because of what they consider to be the hostile population, which are two of the largest Islamic countries in the world. So they prefer to deploy their forces here while monitoring the activities there,” said Simbulan. the author of “The Bases of Our Insecurity,” a book published in 1983 that is considered the most authoritative on the issue of US military presence in the Philippines.

“But, by and large, the most important value for them of the Philippines is its strategic location: we are at a critical area where north of the Philippines and south of the Philippines you have the critical flow of sea lanes for US (and) Japanese vessels – both military and commercial – coming from the Middle East, bringing in oil supplies and other raw materials all the way from Africa to the Pacific Ocean. Of course, anyone who controls this area, this gateway where the Philippines is located, will control the flow of trade in this area. And next to that, of course, is the location of the Philippines facing China, because in the medium-term and long-term basis, the United States still looks at China as a potential rival within the next 15 years, (if) its military prowess (catches) up with the economic power that it has right now.

“So these are some things that they have factored in in their strategy, so they would want a restoration of strong military presence in the Philippines after the pullout of the US bases in 1992.”

What, then, has the Philippines gained from the VFA?