MANILA — The 10th Infantry Division of the Philippine Army practically admitted the existence of a so-called “order of battle” (OB) in its recent statement to the media.

Ocampo, along with other human-rights groups, exposed the said OB to members of the media in Davao City two weeks ago. The legislator participated in the three-day International Solidarity Mission (ISM) held at New Bataan, Compostela and Monkayo towns in Compostela Valley province; Paquibato district in Davao City; Sta. Cruz town in Davao del Sur; and Tampakan, South Cotabato.

“Here are gung-ho AFP division officers publicly affirming what UN [United Nations] Special Rapporteur Philip Alston has specified in his reports, that military officers openly vilify legal personalities and organizations as enemies of the state, making them fair game in the counterinsurgency operations that they conduct with impunity based on inaccurately packaged as intelligence,” Ocampo said in a statement reacting to Decapia’s accusations.

In this video clip, NUJP vice chairman Jaime Espina explains his group’s position against the military’s “order of battle.”

Alston, who visited the country in February 2007, said in his report to the United Nations Human Rights Commission that “the government should immediately direct all military officers to cease making public statements linking political or other civil society groups to those engaged in armed insurgencies… They must be based on transparent criteria, and conform with the human rights provisions of the Constitution and relevant treaties.”

In the same report, the special rapporteur also deemed that transparency must be introduced to the “orders of battle,” “watch lists,” and similar list of individuals and organizations maintained by the AFP, Philippine National Police (PNP), and other elements of the national security system. 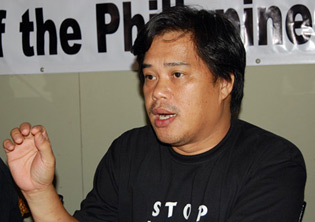 Also named in the document was Celso Pojas, spokesman of the Kilusang Magbubukid ng Pilipinas (KMP, or Peasant Movement of the Philippines) in Southern Mindanao and chairman of the Farmers Association of Davao City (FADC). Pojas was gunned down in May last year.

However, Major General Reynaldo Mapagu, commander of the 10th ID, said Ocampo only “took advantage of the possession of the alleged military document to mar the image of the military forces, gain media mileage and regain the support of the masses and local executives.”

While Mapagu denied the existence of the document, Decapia even explained the terms used in the said list. “…Ocampo insinuated names [in the list] as targets of the AFP/10ID when in fact these are targets (for infiltration) by the CPP/NPA [Communist Party of the Philippines/New People’s Army].”

Mapagu said Ocampo might be involved in espionage and could also be charged for libel and malicious mischief or misrepresentation.

Ocampo said the 10th ID has no basis for filing a libel case against him. He said that all the reports published in regional newspapers Sun.Star Davao, MindaNews, Mindanao Mirror or Mindanao Times regarding the OB are generally accurate and fair.

“It is Colonel Lysander Suerte, 10th Infantry Division chief of staff, who has made distortions of what I said and has attributed statements to me not shown in the news reports that should be condemned,” Ocampo said.

As to the charge of espionage, Ocampo said that it “implies that I actually managed to get through the military’s notorious blankets of secrecy to obtain what the 10th ID would want the public to believe is a harmless briefing paper.”

In a privilege speech, May 27, Anakpawis Rep. Joel Maglunsod said his inclusion to the OB is political harassment and a direct threat to his life.