Pagbabago, however, is by no means the only new group whose avowed purpose is to change the country. How does Pagbabago differ from the others?

“First, Pagbabago has a post-2010 elections advocacy, unlike others which merely serve as election machineries. Second, its 11-point program is a genuine response to the people’s grievances. And third, its coordinating council is composed of veterans of the social and people’s movements and have no interests except those of the people,” Tolentino said.

While its advocacies certainly go beyond 2010, Tolentino said, Pagbabago will definitely have to play a major role in the 2010 elections.

“Pagbabago is needed in undertaking voters’ education to show that the 2010 elections will not provide the solutions to the country’s problems. Rather, the elections will only serve to perpetuate the elitist and neocolonial character of the country’s leadership,” Tolentino said. “Pagbabago is also needed in resisting all attempts of the Arroyo administration to perpetuate itself in power, whether through the no-elections scenario, Charter change, or the anointment of an ‘heir’ to the throne.” 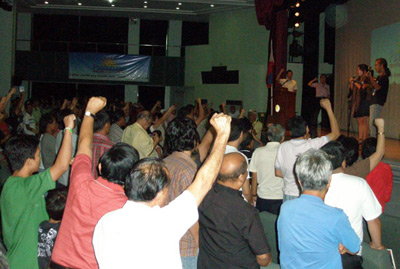 Mother Mary John Mananzan of the Association of Major Religious Superiors of the Philippines (AMRSP) and Prof. Judy Taguiwalo of UP were elected co-chairs of Pagbabago during the founding assembly.