“I thought I was going to die there and then,” Melissa Roxas recounts her ordeal. “They held my feet and my hands down and doubled-up plastic bags were pulled down on my head and face and closed on my neck and I started to suffocate and I could not breathe anymore and I was seeing white and thinking I was going to die.”

The three were forcibly taken by armed men wearing bonnets on May 19 while conducting an initial survey for a medical mission in La Paz, Tarlac. Roxas was surfaced six days later; Carabeo has also been released. But Jandoc (not Handoc as earlier reported) remains missing to this day, human-rights group Karapatan said in a press conference this morning.

Fearing for her own safety and those of her relatives here in the Philippines, Roxas, through Karapatan legal counsel Rex Fernandez, filed a petition for writ of amparo before the Supreme Court yesterday. Roxas went back to the United States Sunday evening.

Read Melissa Roxas’s affidavit, her petition for writ of amparo and other related documents

In her affidavit, Roxas recounts in detail the six days that she was in captivity. The interrogation and torture that she was subjected to point to the military as the perpetrators.

“It is beyond doubt that it is the military who took us,” Marie Hilao Enriquez, Karapatan secretary-general, quoted Roxas as saying. Roxas has given Enriquez a special power of attorney to act and speak on her behalf.

Roxas, an American citizen, applied for an exposure program in the Philippines as part of her involvement with Habi Arts, a cultural group in Los Angeles where she was also a member of the Bagong Alyansang Makabayan (Bayan)-USA. In April, she was endorsed to Bayan’s chapter in Tarlac, a province north of Manila. 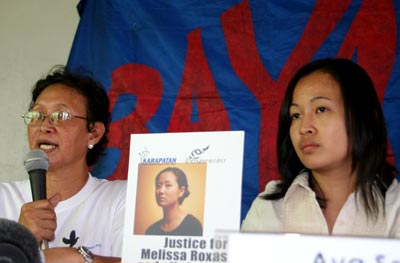 At around 1:30 p.m. of May 19, Roxas and her two companions were resting inside a house in Kapanikian, watching television, when they heard a banging on the door and a voice asking the door to be opened.

“I immediately went to see what was going on and found about 15 men in civilian clothes armed with high-powered rifles and wearing ski masks or bonnets surrounding the house and, in a little while, the door was forcibly opened and armed men swarmed into the house… and ordered us to drop face flat on the ground,” Roxas says in an affidavit distributed during the press conference Tuesday.

Roxas did not obey the order and one of the men held her head and pushed her on the ground. She started to shout her name repeatedly. She was punched repeatedly on her rib cage. She and her two companions were forced inside a blue van parked 15 meters from the house.

They left and traveled for more than an hour.

Enriquez said that based on Roxas’s descriptions of the place of their detention, the three were taken to Fort Ramon Magsaysay, an army camp in Laur, Nueva Ecija.

“Her descriptions of the place were similar to Raymond Manalo’s,” said Enriquez.

Raymond and his brother Reynaldo Manalo were farmers who were abducted by elements of the 7th ID on Feb. 14, 2006. In his affidavit, Raymond said they were taken to Fort Magsaysay, among other military camps and safe houses during their 18 months of captivity. After their escape, Raymond also filed a petition for writ of amparo, which the Supreme Court granted in October 2007.

“I heard construction activities… and I also heard gunfire as though in a firing range and planes taking off and landing and it was loud and I could also hear goats bleating,” Roxas states in her affidavit. Fort Magsaysay has an airstrip.

Blindfolded and handcuffed, Roxas was interrogated for five days.

Roxas was told by her captors that she was abducted because she was a member of the Communist Party of the Philippines (CPP) and the New People’s Army (NPA), which has been fighting a Maoist war for more than three decades now. She was repeatedly asked about her involvement with Bayan and about the people she was working with.

“I was having a streaming thought that I was going to die there and then, then, they held my feet and my hands down and doubled-up plastic bags were pulled down on my head and face and closed on my neck and I started to suffocate and I could not breathe anymore and I was seeing white and thinking I was going to die and then he released the hold and I could breathe but I was faint and weak…” Melissa recounts.

Dr. Reginaldo Pamugas, a physician and secretary-general of the Health Action for Human Rights, examined Roxas on May 26. He described this form of torture as “dry submarino.”

This form of torture was also used against Berlin Guerrero, a pastor of the United Church of Christ in the Philippines who was abducted and tortured in 2007 and was freed more than a year later. Guerrero maintained that military agents were behind his abduction.