According to a study by the economic think-tank Ibon Foundation, full land ownership in the Philippines has actually been declining since 1972, when the dictator Ferdinand Marcos passed Presidential Decree No. 27 that created the Department of Agrarian Reform (DAR). Fully owned farms during that period accounted for 63 percent of total farm area, but this decreased to around 50 percent in 2002.

“Although there was a decrease in the share of completely tenanted and leased lands, this did not translate into full ownership but only part ownership,” Ibon Foundation’s research head, Sonny Africa, wrote in 2006. This implies, he said, “a continuation of tenancy and lease arrangements.”

In fact, Africa pointed out, the Annual Poverty Indicators Survey (APIS) of 2002 reported that “only 11 percent of all families owning land other than their residence had obtained land through CARP.”

Africa explained that CARP’s failure is rooted in its pro-landlord orientation. “CARP is not about free land distribution to the tiller, which is the core of a genuine land reform program. Instead, CARP seeks to provide landlord compensation and require peasant beneficiaries to pay for land that they have been tilling for generations. Land reform under CARP is essentially a land transaction between landlords and peasants with the government acting as the middleman.”

CARP, Africa said, “cannot address peasant poverty and landlessness because it was never meant to.”

In a statement released today, Ibon said CARPER “strengthens the pro-landlord provisions of the failed CARP.” For one, it said, the bill “promotes the creation of more agrarian-reform communities (ARCs), further increasing the insecurity of land tenure in the countryside. The House version, in fact, seems to target the fine-tuning of the bankrupt ARC program to continue restructuring local agriculture in order to suit the needs of big land owners and agro-corporations.” 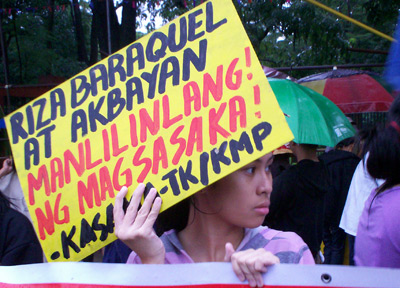 Far from developing farming communities, as the name implies, ARCs have actually been used by landowners and big business to circumvent CARP. Among the ventures these communities go into are contract-growing schemes that favor companies and essentially turn the peasants into farm workers, not farm owners.

CARPER, as well as the agrarian-reform extension bill in the Senate, “reinforces the pro-landlord orientation of the original CARP, which was why it failed to make a dent in peasant landlessness in the first place,” Ibon Foundation said.

Outside Congress hours before the voting, peasants and farmers have congregated to protest the impending passage of CARPER.

“CARPER creates additional loopholes to the already punctured CARP,” said Imelda Lacandazo, spokesperson of Kasama-TK, a peasant group from Southern Tagalog. “Twenty years of CARP is enough to conclude that it has and will never benefit our poor farmers.” CARPER is even worse than CARP, she said, especially after amendments were introduced that would further “reconcentrate lands in the hands of big landlords and big business.”

The progressive bloc in Congress led by partylist legislators from Bayan Muna, Anakpawis, Gabriela and Kabataan tried to introduce amendments to CARPER but were prevented every step of the way.

Among the rejected amendments was the one scrapping the stock-distribution option in the original law, which has been blamed partly for CARP’s failure. This option allows landowners to give shares of stocks of a farm venture to farmers, instead of actually subdividing and distributing the land, which should be the intent of a genuine agrarian reform program.

Despite the rain on Wednesday, hundreds of farmers and activists lit their torches at the south gate of the Congress, with some banging on the doors of the gate. A firetruck was brought by House security to be used in case a dispersal was needed.