“We are not here to create trouble,” said Danilo Ramos, secretary-general of the Kilusang Magbubukid ng Pilipinas (KMP, or Peasant Movement of the Philippines). “We are here to express our sentiments about this law.”Ramos and his groups tried to enter the gallery to watch the plenary session but were prevented by House security, which even barred employees from entering the hall at some point during the day.

Lacandazo of Kasama-TK decried the prioritization of CARPER over the Genuine Agrarian Reform Bill (GARB). Authored by the late Anakpawis Rep. Crispin Beltran, GARB or House Bill 3059 seeks to distribute land to landless farmers for free. Filed in November 2007, GARB is still pending with the House committee on agrarian reform.

“A genuine land reform law is impossible to attain in a Congress dominated by landlords, greedy politicians and their cohorts,” Lacandazo said. “The true interest of the House leadership is clear – it is to perpetuate the Arroyo ruling clique in power, and not to serve the poor farmers, which make up the majority of this country.”

Rep. Dato Arroyo from Camarines Sur, the president’s son, defended his “yes” vote by saying that “what we need is an extension of CARP that may be seen faulty or flawed by many of our colleagues, but that extension is better than having nothing at all.” 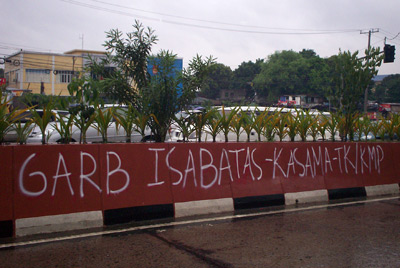 The House leadership conducted the nominal voting in an unusual way – it called on each legislator using the reverse alphabet, seemingly so that the Arroyos in Congress, all four of them, would not be among the first to vote “yes” one after the other.

And for some reason, many of those who voted for CARPER could not say their votes out loud and were using signs to communicate their “yes” votes. (Bulatlat.com)