Prudencio Calubid: The Best Father a Child Could Have

MANILA — Does one celebrate Father’s Day if the father is missing? I don’t.

What is there to celebrate when my siblings and I get helpless each day in finding him. His basic rights were taken away the day he and my mother were abducted by the military. But for us, hope is endless until we get to the day we will see him and my mother again.

My parents are Prudencio Calubid and Celina Palma. My father is a National Democratic Front of the Philippines consultant for the peace process. On their way to Samar, they were abducted along Maharlika Highway, on the boundary of Quezon Province and Camarines Norte. A red Tamaraw FX and four other Toyota Revos (one white and two silver and one striped violet) with plate numbers covered with mud, blocked their way. The men from the white Toyota Revo fired three shots in the air and its two passengers in civilian clothes with small Armalite rifles alighted and ordered my parents and their companions – Ariel Beloy, Antonio Lacno and my cousin Gloria Soco – to get out of the vehicle they are riding. Tatay and Lacno were transferred to the Toyota Revo while their other companions were transferred to the other vehicles. They were immediately blindfolded and handcuffed. 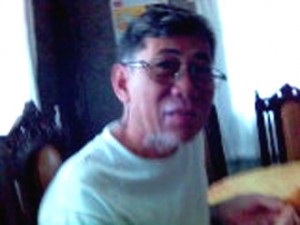 Antonio Lacno was able to escape after several days of captivity from the military. He is the one who told me how they were tortured – how my parents were tortured, how my mother endured severe pain and how my father stayed strong amidst suffering.

That is my father – ever strong even in hard situations, yet gentle to his children, wife, friends and other people who came across him.

My siblings and I didn’t spend much time with my father as we were growing up. But on those rare times that we were together, he taught me things that would’ve taken me a lifetime to learn.

Tatay taught me generosity. He said I should be ready to offer what I have to others who need them more. I never saw him get mad, in contrast to my mother who was a strict disciplinarian. He was always courteous even to us. I never heard him use profane words.

I also remember Tatay never allowing leftover food go to waste. To make sure this rule is followed, he himself would eat our leftover food. He always reminded us how lucky we were to have enough food than most children who can’t even afford to have a decent meal.

He also has the fatherly patience at explaining seemingly difficult subjects, yet has ways to express it in the simplest manner to be understood easily. He would always open things up for discussion.

I remember when we had a passionate argument about people living in the slums while others live in luxurious condominiums. Like many “privileged” inidividuals, I called these impoverished people lazy, which is the reason for their poverty. Tatay made me think it’s not that simple. He made me think differently.

He strongly believes that our country will someday change. He knows that, even if the change will not come in his lifetime, his children and grandchildren will carry on the cudgels of liberating our people from the oppression, from exploitation and from poverty.

This I can say: Prudencio Calubid, my father, is a good citizen of this country and that is how I remember him most. As I grow and witness the realities of life and society, I always remember Tatay. He never imposed his principles, he let us learn it on our own, he is just there to guide us. These are the same principles that make him a great person, not only as a father, but as a revolutionary (which I learned later). But these are also the same principles that led this current regime to consider him a “dangerous enemy.”

Tatay, I am glad of those moments we had. I am glad you are my Tatay. Hope you and Nanay will someday come home to us. (Bulatlat.com)

Nuki Calubid is 23 years old. He was in his senior year in college when his parents were abducted three years ago. He now lives with his siblings and continues to struggle for justice, with hopes that, one day, he and his siblings will be reunited with their parents. He is also a member of Desaparecidos, an organization of relatives of the victims of enforced disappearances.