Melissa Roxas: ‘Talking About What Happened Is Like Going Back to That Dark Place’

MANILA — Filipino-American Melissa Roxas finally broke her silence and recounted her ordeal in the hands of the military.

Roxas and her two companions, Juanito Carabeo and John Edward Jandoc, were abducted in the afternoon of May 19 in sitio Bagong Sikat, barangay Kapanikian, La Paz town, in Tarlac, a province just north of Manila.

Roxas was freed after six days, followed by Juanito Carabeo. The family of Jandoc said he had texted them that he was already free but he has not been seen.

Speaking at a press conference in Los Angeles broadcast simultaneously online, Roxas read portions of her affidavit submitted to the Supreme Court. Her counsel filed a petition for writ of amparo before the Supreme Court days after her release. The Court of Appeals is still hearing the petition.

Roxas said her captors repeatedly interrogated and tortured her. She said she was also handcuffed to a bed. 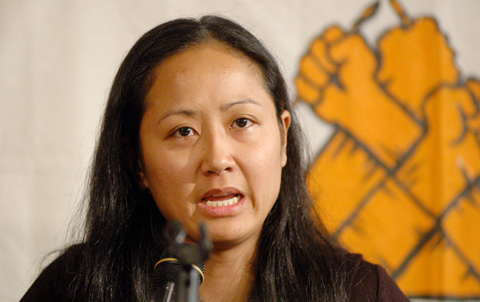 Melissa Roxas during the press conference in Los Angeles.

They accused her of being a member of the New People’s Army (NPA) and that they were “instruments of God” whose mission was to bring communist rebels back to the fold of law. “My God does not torture people,” Roxas told them.

“Talking about what happened is like going back to that dark place,” Roxas said. She has been seeking medical treatment for the physical and psychological trauma she suffered.

Roxas, Jandoc and Carabeo were volunteer health workers preparing for a medical mission in Tarlac when they were abducted, according to Bayan in Manila.

Though she has not received threats since she came back to the United States, where she was born, Roxas said she continues to fear for the safety of Carabeo and Jandoc. “I have to live with that fear every day,” she said.

Roxas went back to the US to be reunited with her family there and to seek the treatment for the effects of the abduction and torture.

“I don’t want what happened to me to happen to any one else ever again,” Roxas said.

Reacting to the statement of the government lawyers that the abduction was stage-managed, Roxas said: “No amount of their lies or denials can deny the truth.”

Arnedo Valera, her lawyer in the US, said the Philippine government should be ashamed for their highly irresponsible and immoral remarks about Roxas’s case.

During the first hearing at the Court of Appeals last week, state prosecutors said the abduction was stage-managed by the victim. Earlier, the Philippine Human Rights Commission led by Secretary Eduardo Ermita claimed the incident was a mere fabrication.

“Melissa was tortured. That is a fact,” Valera said, adding that the Philippine government only wants to escape liability for claiming otherwise.

Valera said that instead of lying, the least the Philippine government should have done is to surface the abductors. “They know what they have done to Melissa,” he said.

“Instead of following the rule of law [on the case of Roxas], the rule of the jungle prevails,” the lawyer added.

Valera said they will seek before a US federal court punitive and compensatory damages against Roxas’s identified assailants or the Arroyo government in the absence of named assailants.

They will also file a private complaint before the US Department of State’s Human Rights Desk against the Philippine government for the violation of the fundamental rights of a US citizen. Valera said Melissa will also file complaints before the appropriate United Nations agencies for violations of the International Covenant Against Torture, the Covenant on Civil and Political Rights, and the UN Declaration of Human Rights.

Roxas said she will be exercising all of her rights. She said she is willing to pursue the petition she filed in the Philippines even if that means she would have to appear in a Manila court.

Citing data from human-rights group Karapatan, Ramiro said that from 2001 to March 2009, there have been 1,017 victims of extrajudicial killings, 201 victims of enforced disappearances, 203 victims of abduction and 1,010 victims of torture.

What is more infuriating, Ramiro said, is that the hard-earned taxes they pay to the US government is being used to commit abuses against Melissa and other victims of state-sponsored violence in the Philippines.

The US remains as the top source of military aid for the Philippines, where the US government keeps an undetermined number of troops for so-called military exercises in the south and elsewhere. Critics have said these exercises have spawned numerous human-rights atrocities. (Bulatlat.com)