Iggy Rodriguez, whose body of work reflects the social realities he wants to change as an activist, considers the award an opportunity to introduce people to the mass movement. Artists, he said, should “create for the people” and they should remain conscious that their “real arena is not the closed galleries but the streets, among the people.”

MANILA — Last May, he was detained for two nights when he was illegally arrested along with six other activists protesting the demolition of urban-poor communities in Sucat, Paranaque. Now, he can have the last laugh.

On July 9, Raul Ignacio “Iggy” Rodriguez will receive an award from the Cultural Center of the Philippines (CCP) no less. He is one of the recipients of this year’s Thirteen Artists Award, an award given every three years by the CCP to emerging artists. Iggy will deliver this year’s “acceptance” speech for his batch.

The Thirteen Artists Award is given to 13 emerging artists every three years. The recipients have to be nominated by curators or former recipients of the award. The selection is based on the nominated artists’ body of work and not on their achievements as individual artists. 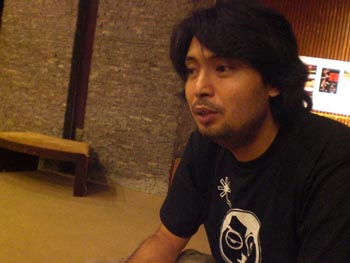 The work of the 13 artist-awardees will be on exhibit at the Bulwagang Juan Luna (main gallery) and the Pasilyo Guillermo Tolentino (third floor hallway) of the CCP up to August 16.

In an interview with Bulatlat.com, Iggy said he is happy and excited, and he talked about hope and challenges of being an artist in these trying times.

For Iggy, artists should be active participants in the movement for social change. “It has always been the role of real artists to serve the people, live with them, experience their lives and struggles while offering to them and to the country the artists’ most colorful and beautiful creations.” 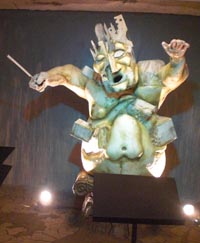 Iggy Rodriguez’s “Symphony of Destruction”: The conductor may be a king, an emperor, a force that brings forth destruction to the people. (Photo by Terence Krishna V. Lopez / bulatlat.com)

This artist’s portfolio lives up to his ideas about the role of artists. Most of his work deals with the life and struggle of the people. His work reflects the poor and the marginalized and their resolve to fight the establishment.

Asked about other emerging artists whose work mirror social realities but are not directly involved with the people’s movement, Iggy said “we should recognize them for being brave enough to show life’s realities in their works.”

But Iggy added that it is also just as important to recognize the different levels of each artist’s reach in their respective disciplines.

On top of using their social-realist vision in their career, it would be more substantial if they actually live with the people and experience these realities with them.

Of progressive artists who are not directly involved with the people’s movement, Iggy said: “Let us not limit ourselves; nothing is given to us naturally, it all starts in asking questions but eventually, we have to answer the ultimate question, ‘For whom do we offer our work?’”

One of the biggest challenges for an artist is overcoming individualist and elitist tendencies, Iggy said. “Every artist must see beyond his own personal interests. The signs of the times have been telling us to set aside our individual interests and contribute to social change,” he said.

There are many ways of overcoming these tendencies, for instance, by collaborating with other artists, Iggy said.