You Are Here: Home → 2009 → July → 12 → Students Across the Philippines Walk Out of Classes to Protest Cha-Cha

MANILA — Despite the swine flu epidemic, the bombing scare and heavy rain, students and the youth groups belonging to the Kabataan Kontra Cha-Cha coalition were undaunted on Friday as they walked out of their classes in a nationally coordinated protest action against constitutional amendments.

Students from the University of the Philippines started the day of protests with a forum on charter change at the Rafael Palma Hall Friday morning. Later, they joined other students who had converged in front of the University of Santo Tomas in Espana and marched toward Plaza Miranda, where they met up with other students from the schools along Taft Avenue at around 2 p.m.

Minutes after the short program in Plaza Miranda started, the heavy rain began to pour. Some students sought shelter inside Quiapo Church while others shared their umbrellas with fellow participants. Despite the downpour, the students seemed to be listening to every word that the leaders were saying, shouting and chanting. 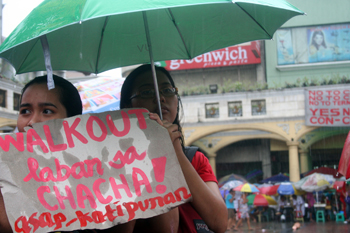 After the program, nearly 500 students marched toward Mendiola but they were blocked by police officers upon reaching the Centro Escolar University. The students continued their program there until evening. 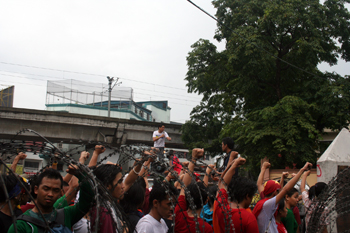 The walkout and protest was a build-up to the Sona protest on July 27. View slideshow (Photo by Ronalyn V. Olea / bulatlat.com)

Ma. Cristina Guevarra, chairperson of Student Christian Movement of the Philippines said youths and the students in Mindanao also denounced the recent bombings in Iligan City, Cotabato City and Jolo.

The nationwide rallies, Peters of NUJP said, “served as indignation to the threats that President Gloria Macapagal-Arroyo might declare martial law.”

The July 10 walkout also served as a build-up to a much bigger protest action on Arroyo’s ninth and last State of the Nation Address in Congress on July 27. “The youth shall make sure that this shall really be Arroyo’s last Sona,” Peters said. (Bulatlat.com)