You Are Here: Home → 2009 → July → 19 → Political Prisoner Remains in Jail Despite Court’s Dismissal of Cases

Political Prisoner Remains in Jail Despite Court’s Dismissal of Cases

MANILA — “How can we claim to be under a democracy when a political prisoner continues to languish in jail even as all the trumped-up charges filed against her have already been dismissed?”

This is the question foremost in the mind of the relatives and colleagues of Elizabeth Principe, who remains detained at Camp Crame a week after her release had been ordered by the Regional Trial Court Branch 30 in Nueva Vizcaya. On July 6, the court dismissed the robbery with murder case — the last of six charges filed against Principe– for lack of probable cause.

All other cases against Principle that were filed in Cauayan, Isabela; Dupax, Nueva Vizcaya and Candon, Ilocos Sur were earlier dismissed, according to the Samahan ng mga Ex-Detainees Laban sa Detensyon at para sa Amnestiya (Selda).

Principe, a health worker in Cagayan Valley and consultant for the negotiating panel of the National Democratic Front of the Philippines (NDFP) in the peace talks with the Government of the Republic of the Philippines (GRP), was abducted by five elements of the Military Intelligence Group on Nov. 28, 2007 in Cubao, Quezon City. For three days, she was handcuffed, blindfolded, heavily interrogated and kept incommunicado. She was presented to the media as a high-ranking member of the New People’s Army (NPA) before being transferred to Camp Crame, the police headquarters. 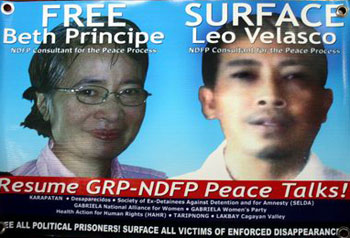 “The Philippine National Police and the CIDG [Criminal Investigation and Detection Group] must release my mother now. Do not let her suffer in jail one more day! We have proven that my mother is innocent from all the charges against her,” Lorena Santos, Principe’s daughter, said.

The Custodial Center of Camp Crame had forwarded the release orders to the CIDG for comments, as a standard procedure. But CIDG officials maintained that they have not yet received a formal communication ordering the release of Principe.

“It is not my mother’s fault that your office is not updated on her cases,” Santos, however, said. “This is illegal detention and a violation of her rights. She must be released immediately.”

Lorena’s father, Leo Velasco, also a consultant for the NDFP, was abducted on Feb. 19, 2007, in Cagayan de Oro City and remains missing to this day.

“Since the government and the NDFP intend to resume the peace talks next month, this is all the more reason to release my mother Elizabeth Principe and to surface my father Leo Velasco,” Lorena said.

Last week, Executive Secretary Eduardo Ermita announced the lifting of the suspension of the Joint Agreement on Security and Immunity Guarantee (Jasig) on July 17. The Jasig provides safety and immunity privileges to members of the NDFP who are involved in peace negotiations, including panel members, consultants and staff members. It has been suspended by the government since September 2005, after the NDFP withdrew from the negotiations.

Both the GRP and the NDFP confirmed the news that the peace talks would resume this August.

Human-rights group Karapatan said the lifting of the Jasig suspension should pave the way for the release of all NDF consultants, staff and other individuals who are now in detention for several trumped-up charges.

Karapatan secretary-general Marie Hilao-Enriquez expressed concern that Principe is not yet released from Camp Crame despite the dismissal by the courts of all the charges against her.

The group urged the government to immediately release Principe, all detained NDF consultants and staff as a confidence-building measure for the peace negotiations.

Karapatan also called for the dismissal of the charges against NDF consultants Vicente Ladlad and Rafael Baylosis, calling these fabricated. (Bulatlat.com)