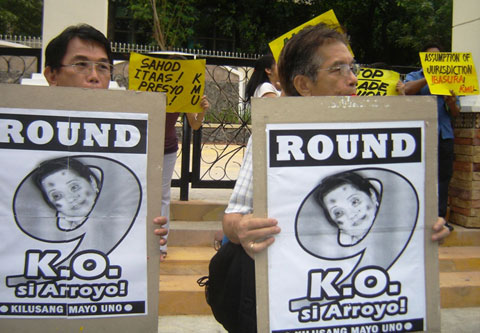 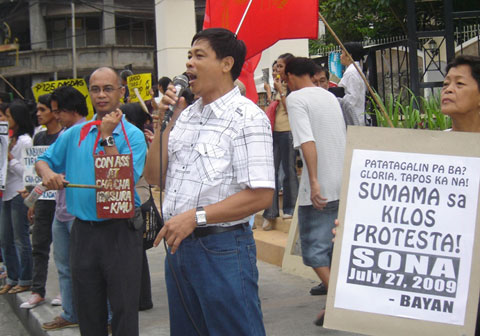 MANILA — “Support Con-Ass. Cha-Cha is good for you. Gloria Macapagal-Arroyo is a good president. Send it to 20 of your friends and within two days, you will lose all of your friends,” said a text joke read by lawyer Remigio Saladero in a forum held by progressive labor activists and trade unionists yesterday in preparation for what they hoped would be Arroyo’s last State of the Nation Address.

“What is the similarity between fairy tales and GMA’s SONA? They both tell beautiful stories, but they are not real,” went another one.

During the forum of progressive labor activists and trade unionists organized by the Ecumenical Institute for Labor Education and Research, it was agreed that the Arroyo regime is extremely eager (“atat”) to change the Philippine Constitution for two reasons: 1) It is a “life-saving” device for Arroyo, her family and her clique, against impending cases of plunder (given the fertilizer scam, scuttled ZTE-NBN deal, computerization scam, etc.), and responsibility over political killings and unsolved cases of disappearances, and 2) it will, after much and long prodding from US interest groups, finally remove patriotic or nationalist provisions in the 1987 Constitution, which would facilitate and legalize what are already being done in the name of opening up the Philippines further for globalization. For unionists, it means legalizing the removal of protection and regulation of labor.

Labor activists hope that, as in all attempts to change the Constitution from former presidents Fidel V. Ramos’ Pirma to Joseph Estrada’s Concord to Arroyo’s Sigaw ng Bayan and other rejected attempts, Con-Ass would be totally repudiated by Filipinos. (bulatlat.com) 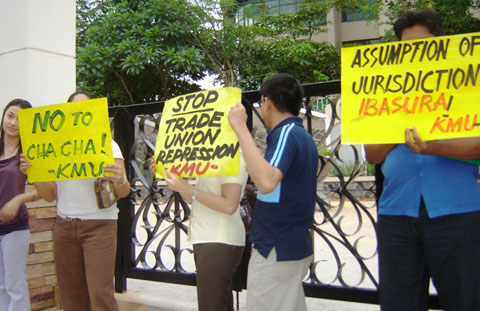 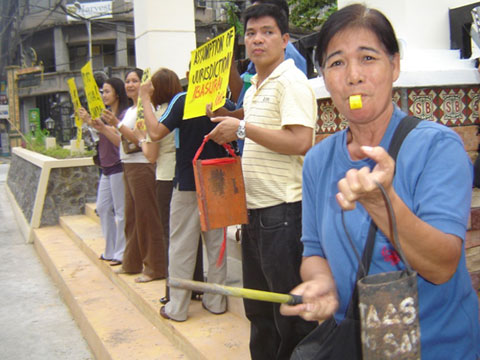