In February, Maribel Figaroa and several other Filipino women went to Oman to work as domestic helpers. Instead of gainful employment, they ended up being abused and exploited by the placement agency that brought them there.

MANILA — The Middle East has long been considered by many Filipinos as one of the most lucrative places to work. But it is also one of the most dangerous places for migrant workers, with many overseas Filipino workers returning home with complaints of exploitative and inhuman working conditions, physical and sexual abuse.

Still, despite the widespread reports of abuses, many OFWs still flock to the countries in the Middle East to find work. Last Feb. 18, 2009, a group of Filipino women applying as domestic helpers in Oman left the country hoping to provide a better life for their families back home. Maribel Figaroa, 37, was one of them.

According to Nestor Figaroa, his wife did not have plans of going out of the country. But their dream of providing for a better future for their two children and the offer of a local recruitment agency to deploy domestic helpers to Oman without asking for a placement fee was enticing. Maribel applied for the job. 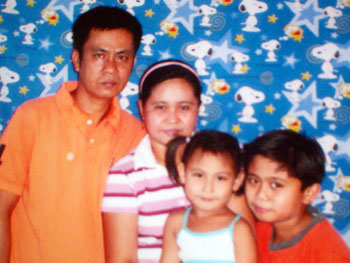 Maribel was promised a monthly salary of $200. But in Oman, she was paid a mere 80 riyals, or $21 a month. Migrante International chairman Garry Martinez said that even if Maribel was paid $200 a month, it still is below the minimum set by the Philippine Overseas Employment Administration (POEA).

He said early this month that the POEA issued a memorandum stipulating a minimum salary of $400 per month for domestic helpers working abroad. “If this contract was approved by the POEA, then it is violating its own memorandum,” Martinez said.

Nestor said his wife often complained about the heavy workload that her employer was demanding from her. After four months of hard work, Maribel asked her employer to bring her to the hospital because she was experiencing difficulty breathing. The medical examination, however, gave Maribel a clean bill of health.

Even after the medical examination, Nestor said, Maribel still had difficulty breathing. She suspected that she had goiter. On June 18, Maribel’s employer returned her to the agency, Gulf Shield Manpower Services, because she could no longer cope with her workload.

Maribel’s cellular phone was confiscated by the agency. She then asked other Filipino women who had access to cellular phones to text her husband to ask him to work for her repatriation to the Philippines as her sickness was getting worse every day.

Nestor told Bulatlat that a certain Loli Patricio, a staff working for the agency, told him that if they wanted Maribel’s immediate return, the family must pay for her plane ticket. He sold the sidecar of his tricycle, which was his only source of income, and borrowed money from relatives to buy the ticket. He was able to raise P19,520 ($404), which he sent to the agency to pay for Maribel’s plane fare. Patricio confirmed to Nestor that they received the money for the plane ticket and that his wife was expected to be home by June 29. 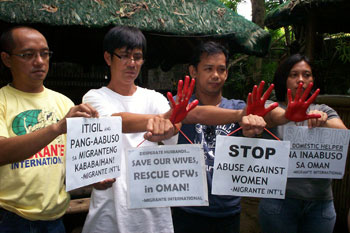 On that day, Nestor waited for Maribel at the airport but she did not arrive.

He was surprised to receive a phone call from her wife at around 7 p.m. that same day. Maribel told Nestor that Patricio was asking for another $1,000 for Maribel’s “replacement fee.”

Martinez said Maribel’s case is comparable to hostage taking. “Had I known that the agency had no plans of sending my wife home, I should never have sold my sidecar. We could have found another way,” Nestor told Bulatlat.

“My only wish now is that my wife be sent home immediately,” Nestor said, adding that his wife had told him to also help the seven other Filipino domestic helpers who are also experiencing the same fate.

Since Maribel and the seven other domestic helpers have no employer, the agency sends them to do part-time jobs as domestic aide to local Arabs. Martinez said this is highly illegal because their work permits stipulate that they should only be working as residential-based domestic helpers. If police officers suddenly check their permits, they are sure to be arrested. Worse, because Maribel is sick, she could not earn enough money to feed herself. The other Filipino domestic helpers who are with her share their food, Nestor said.

Martinez said the Department of Foreign Affairs (DFA) was already informed about the plight of the eight Filipino women in Oman. However, two months have already passed and the DFA has yet to lift a finger to assist them, he said.

Martinez said the stranded women in Oman need urgent assistance. Josephine Antonio of Rodriguez, Rizal, who was one of the eight stranded women, was able to come home to the Philippines after proving that she was really sick. According to Martinez, Antonio told the family of Maribel to act immediately because she heard rumors that the agency would close shop by July 27 and the women under the agency’s custody would be transferred to a farm in Oman. “This is illegal and it would be harder to look for them if this happens because farms in Oman are usually found in the desert,” Martinez said.

Nestor said their two children do not know what their mother is going through. “Every time I leave to follow up the case of my wife, my two children are expecting that my wife would be with me when I come home,” he said. “They miss her so much.” (Bulatlat.com)