Melissa Roxas Testifies in Congress: ‘I Will Not Tire to Tell the Truth’

Below is the opening statement made by Filipino-American activist Melissa Roxas during a hearing by the House committee on human rights on her allegations of abduction and torture in the hands of the Philippine military.

I am Melissa Roxas. Thank you for allowing me to come here today to tell you of my ordeal, which is also a story of many other Filipinos who were abducted and tortured by the military.

I am a member of Habi Arts, a Filipino cultural organization based in Los Angeles. I am also a member of the Bagong Alyansang Makabayan – USA.

I came to the Philippines to learn more about my roots and heritage, to know more about the plight of the impoverished Filipino people and to conduct research for my writing projects. I volunteered with Bayan in the Philippines because I feel that I can achieve my objectives more meaningfully through Bayan’s work with the communities both in the urban and rural areas. To this end, I thought I can put to better use my background on community health. 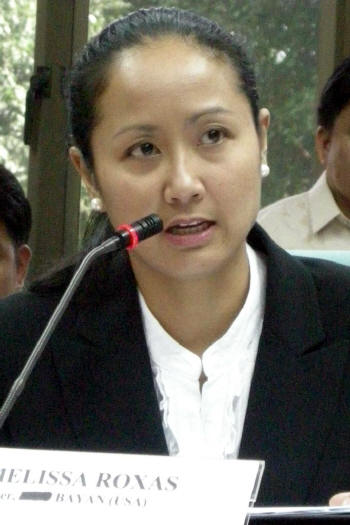 I am a writer and a poet. I am also an activist.

For six days in captivity, my captors tried to force me to admit that I’m a member of the New People’s Army, accused me of being a member of the NPA and told me that it was “people like me” who are the ones who are making it difficult for the government.

Although I repeatedly invoked my right to see a lawyer, my abductors told me that I will not be able to see a lawyer and instead threatened that they can do all they wanted to do with me because they “got me clean.” They threatened me with death and accused me of so many things, especially that of being a member of the NPA. Because of the fear of more pain and I thought that dying came so slow, I told myself to just play along with whatever they tell me I am guilty of and to be back to the fold of the law, as what Dex told me their mission was.

Surprisingly, on May 25, I was released by my captors near my family’s house and instructed me to keep in touch with them; that they hope I do not harbor any ill-feelings against them because the ones who tortured me are from the “special operations group” and not from their group. I was so terrified and traumatized by this harrowing experience that as soon as I can get a flight to the US, I had to leave to reunite with my family. Although still very much afraid for my life and safety, I had to come back to testify before the Court of Appeals and other investigative bodies to obtain justice and tell the public what happened to me so that people would know and they will not allow this to happen to anyone again.

Now, other people are accusing me of being an NPA, forcing me to admit that I’m an NPA and insisting that I was abducted and tortured by the NPA.

I reiterate, I am an activist. I am not a member of the NPA.

And I have reason to believe that the Philippine military were the ones who abducted and tortured me, and held me captive for 6 days. I do not like to dignify the allegations being hurled at me now as they only echo what my abductors have been forcing me to admit during my interrogation and illegal, incommunicado detention. I have filed a petition for the writ of habeas data. I am asking the Supreme Court that all records pertaining to me including videos and photos, false and true, should be expunged and destroyed as they violate my right to privacy. I insist on that.

There are still families looking for their loved ones, and many more still missing. I hope that this august body will also look into the cases of those others still missing and those who have been killed. Thank you very much. (Bulatlat.com)