MANILA – Chants of “US imperialist, No. 1 terrorist!” and “Death to imperialism!” reverberated through the streets as over a hundred activists marched toward the US embassy in Manila earlier today to protest the meeting between US President Barack Obama and Philippine President Gloria Macapagal-Arroyo.

The rally was spearheaded by Bagong Alyansang Makabayan (Bayan or New Patriotic Alliance) and the Philippine chapter of the International League of Peoples’ Struggle (ILPS-Philippines).

Rita Baua, vice chairperson of ILPS-Philippines, said the meeting between Obama and Arroyo would serve the agenda of strengthening US military and economic interests in the Philippines.

Bayan secretary-general Renato Reyes Jr., meanwhile, warned the public to “watch out for deals” between the US and Philippine governments as Arroyo seeks Obama’s approval. 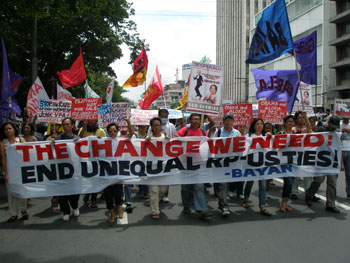 Groups led by Bayan march to the US embassy. (Photo by Alexander Martin Remollino / bulatlat.com)

“We should be very concerned with the agenda of the Arroyo-Obama meeting,” Reyes said. “We don’t know if Mrs. Arroyo will sell us down the river again. In her desperation to stay in power, she may offer the US de facto basing rights, increased troop deployment and 100-percent foreign ownership of land. We have to closely monitor whatever deal they will strike.” 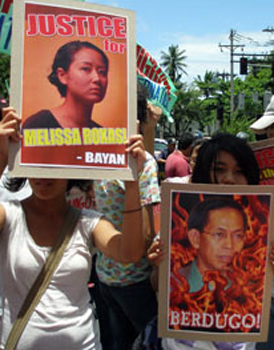 Cherry Clemente, secretary-general of Anakpawis (Toiling Masses) party list, meanwhile, warned that the Obama-Arroyo meeting “could spell more hardships (for the Filipino people) under a kleptocratic and murderous regime.”

Migrante International chairman Garry Martinez said Obama should fulfill his promise of “change” by asking Arroyo to change her government’s policy, “which means putting an end to human-rights violations and corruption.”