You Are Here: Home → 2009 → August → 21 → Under the Gun: School for Tribal Children in Surigao Bears Brunt of Militarization

Under the Gun: School for Tribal Children in Surigao Bears Brunt of Militarization

A non-formal school in Surigao del Sur has shown how education serves as a tool to unite and develop Lumad communities. Now, amid the evacuation by Manobo villages triggered by the presence of soldiers, the school is being targeted by the military, claiming that it is an “NPA school.”

LIANGA, Surigao del Sur — Myra, 18, a Manobo youth, is her parents’ teacher. She teaches them sustainable farming methods alien to the nomadic tribe’s shifting style of planting from one place to another.

Robert, 19, also a Manobo, teaches his parents household sanitation, nutrition and other health practices. He is able to perform minor surgery, first aid, acupuncture and serves as a health worker in monthly medical missions in different Lumad communities.

Myra and Robert are both students at the Alternative Learning Center for Agriculture and Livelihood Development (Alcadev) based in sitio Han-ayan, Diatagon village, Lianga town, in Surigao del Sur. Established in 2004, Alcadev is a non-formal boarding school which is the equivalent of a public high school. The school and its programs serve as a motivating force in the Lumad communities, improving literacy, agricultural production, health conditions, and even reinforce the unity among the Lumad residents. 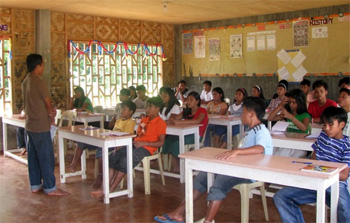 One of the classes at the Alcadev school in Surigao del Sur. (Photo courtesy of Mapasu-Alcadev / bulatlat.com)

But since July 18, classes were suspended at the school. Myra, Robert and the 124 other Alcadev students and their teachers packed their things and joined the evacuation of 15 Manobo communities that fled from soldiers in the area. The students and teachers are among the more than 1,796 residents of Lianga, San Agustin and Tago towns now crammed in makeshift tents at the Diocesan Pastoral Center in Tandag, Surigao del Sur.

Classes were also suspended in six schools of the Tribal Filipino Program of Surigao del Sur (TRIFPSS), affecting 334 students. TRIFPSS schools are non-formal learning centers which is the equivalent of a public elementary school, with classes from level 1 to 6.

TRIFPSS and Alcadev were borne out of the efforts of the Lumad group Mapasu (Malahutayong Pakigbisog Alang sa Sumusunod, or Persevere in the Struggle for the Next Generation), alongside the Diocese of Tandag and the NGO Sildap. TRIFFPS was established in ‘90s. Alcadev was subsequently founded so that deserving graduates of TRIFPSS may continue to acquire higher education. 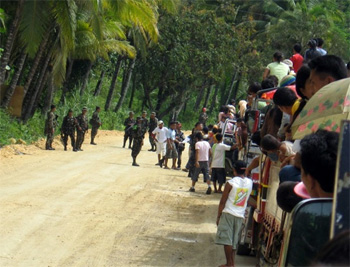 The refugees were stopped in military checkpoints 11 times, extending a normally two-hour drive from Lianga to Tandag to 10 hours. (Photo courtesy of Mapasu-Alcadev / bulatlat.com)

Genasque Enriquez, general secretary of the regional tribal Filipino group Kasalo, said these efforts to educate the Lumads were part of their struggle against discrimination and exploitation of indigenous peoples. Now that the Lumads’ schools are under attack, the Manobo leader couldn’t help but react: “Don’t we have any right to send our children to school?”

“We will not return until the soldiers leave,” Robert said.

Robert said three days before they left Han-ayan, they have been eating two meals of lugaw (rice porridge) and only one meal of cooked rice, to stretch the limited rice supply.