Under the Gun: School for Tribal Children in Surigao Bears Brunt of Militarization

Diatagon residents have complained that since 2008, the military had set up a food blockade, inspecting and limiting the amount of rice the people bring into the communities. But this year has been the harshest because the 58th IB limited the rice purchases to only five kilos per purchase of rice per family.

For those who want to bring in more, the military requires a the community tax certificate, barangay clearance, permits from the mayor and the Land Transportation Office, the official purchase receipt, as well as the list of names of all the persons who will consume the rice. All the requirements cost fees amounting to 70 pesos, and must be fulfilled every time one buys rice in large amounts.

Alcadev students and teachers consume 65 cavans of rice a month and the school purchases the grains in bulk to save on the transportation cost. They also buy an additional 12 to 16 cavans a month that they sell in the community cooperative to augment the residents’ needs. When the soldiers imposed the ban on large grain procurement, only four cavans were allowed entry each week. 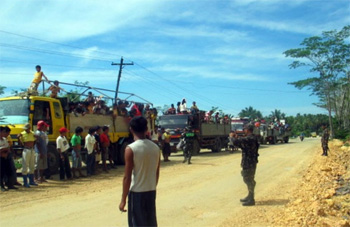 The refugees were stopped in military checkpoints 11 times, extending a normally two-hour drive from Lianga to Tandag to 10 hours. (Photo courtesy of Mapasu-Alcadev / bulatlat.com)

Marife Magbanua, Alcadev program director, quoted a military official’s statement saying the military presence in the area was meant to “pin down Alcadev.”

An Alcadev teacher, Jerome Loquite was transporting four cavans of rice when he was accosted by soldiers at the SAMMILIA checkpoint on July 15 and was brought to the main checkpoint where he was castigated by Lt. Col. Benjamin Pedralvez. “God damn it, you are so pig-headed!” were Pedralvez’s words, according to Magbanua. The army official was insisting that Alcadev submit a list of its students, and when the school refused, Pedralvez started to put pressure.

“You can bring in rice for the staff, but not for the students,” Magbanua quoted how the army official told off the teacher.

“The military claimed that the food that Alcadev buys was not for the students, that the rice was meant for their enemies, and so they limit the entry,” Robert said.

“We already had a hard time studying because our bellies were empty. We were getting weak,” Myra added.

Amor, a Level 6 student in Lagangan, Tago, said TRIFPSS students had to walk for two hours to get to school, and many stopped going to their classes. “They can’t come to class. They were hungry, and they still have to walk far,” she said.

In Han-ayan, Lianga, the Level 1 class erupted into panicked cries when the children saw the soldiers arrive in July. Class attendance in TRIFPSS dropped the following days as parents kept their children indoors. The last day before evacuation, only 30 out of some 200 students came to class.

Magbanua joked that year 1 and 2 students become chubby in Alcadev. But their bodies trim down as they mature. “We have a school garden and the students themselves grow the vegetables that they, we eat.” There is also a fishpond and pigs, chickens and ducks. “There are many food crops and meat sources when the community is at peace.” (Bulatlat.com)

(Next: School Helps Build Lumad Communities, to the Military’s Consternation)