The history subject includes the study about the five main Lumad tribes in Caraga, Lumad culture and human rights. Students make indigenous musical instruments. Tribal music and dances are performed in cultural shows every Friday afternoon. “The school becomes a venue for the Lumad students to re-root,” Magbanua said, adding that the moves come naturally to the Manobo youths.

Magbanua recalled an unschooled datu (tribal chief) whose words astonished them: “When my child was in first year, so was I; when she was in second year, so was I. She brings home everything she learned in school.”

Alcadev’s director said they were amazed at how “the student’s transformation goes through to the community.”

There is no electricity in sitio Han-ayan where the Lumad high school is located. On the positive side, students are more focused on their lessons and productive work because there are no distractions. “There is no TV, nor videoke,” said Magbanua. During their free time, and even on weekends, Magbanua said she would see students tending to their garden instead of loafing around. 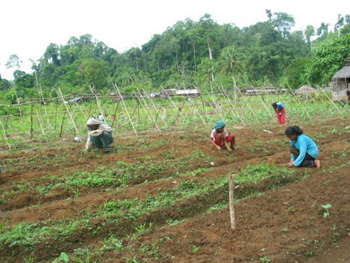 The boarding school setup instills “holistic discipline” in the students. “Being live-in students is part of the learning experience. They acquire discipline whether in the dormitory, in farm work, in the classroom.”

It was this discipline that soldiers tried to question in order to sow intrigue among students in 2007.

TRIFPSS administration officer Willyn Valmores recalled a student’s account about a soldier asking whether the students are allowed to have romantic relationships in school. When the student answered a school policy tha tdisallows such a relationship, the soldier said that their right was being suppressed. When the student retorted that most of them are blood relatives anyway, the soldier answered back: “You are really with the NPA,” the soldier said, referring to the New People’s Army, the armed wing of the Communist Party of the Philippines that has been waging a four-decade Maoist revolution in the Philippines.

Magbanua said the policy against having relationships was agreed upon by the manigaon (tribal elders), the school, the parents and the students. “The agreement was they must finish their studies first,” she said.

Ironically, such discipline was absent among the soldiers who made sexual advances toward the female students and teachers in Alcadev and in TRIFPSS, according to Magbanua. Soldiers would call the attention of young girls as they walked to school. Some even approached female teachers and say “Ma’am, I have a crush on you,” Magbanua said.

In 2006, TRIFPSS won third place in the government’s National Literacy Awards of the Department of Education, with Alcadev packaged as the offshoot of its literacy efforts. TRIFPSS has already won first place twice in the said awards.

Magbanua said that Alcadev has been certified by the Bureau of Alternative Learning System in the province of Surigao del Sur as an entry to National Literacy Award.