The National Council on Indigenous Peoples (NCIP)- Caraga Region facilitated the entry to college of two Alcadev graduates and sponsored 22 Alcadev learners this school year. The Bureau of Alternative Learning System of the province facilitated Alcadev graduating students for the Accreditation and Equivalency (ALS A and E) test. Graduates must pass the ALS A & E test to be able to qualify for college education. The Department of Education provided Alcadev’s curriculum and reviewers for the takers. Tesda, the technical-skills learning institution of the government, has also been helping Alcadev for its short courses and technical skills.

Magbanua said because the military presence caused the evacuation, the students’ application for the A and E exams was affected. Out of the total of 55 graduating students and graduates who were supposed to apply for the October exams, only 14 were able to process their application.

In 2008, five out of 18 takers from Alcadev passed the ALS A&E exams. Magbanua said this was unexpectedly low since most takers said they found the exams easy. But she said it was still a good number, given that only 33 passed in the whole province out of the more than 100 takers. 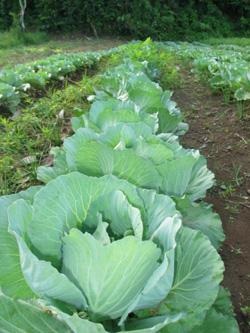 A cabbage patch maintained by the students. (Photo courtesy of Mapasu-Alcadev / bulatlat.com)

Alcadev’s efforts to improve the literacy and livelihood of the Lumads was supported by various international NGOs. The French NGO Enfants du Mekong (EDM) has supported Alcadev with infrastructure and scholarship funds. Recently, the school held disaster management trainings for the indigenous peoples youth which was supported by Save the Children Foundation. The food security projects implemented by Alcadev in the communities was supported by New World of Belgium.

But even these institutions and foreign nationals who support the school are spared from military harassment. Magbanua recounted how she and Antoine Borius, the project coordinator of EDM, were held and interrogated at a military camp in Dec. 13, 2008. She said that they had just come from Alcadev’s Christmas party in Han-ayan when they were accosted at a checkpoint and were invited by a Lt. Sison of the 58th Infantry Battalion to the 401st Infantry Brigade camp.

“We went along because we thought they had good intentions,” Magbanua said. When they got to the camp, Borius was ushered inside the office, where it turned out he would be interrogated and questioned about his support for Alcadev.

This year, the military blocked the entry of seven Belgian visitors that were going to attend Alcadev’s foundation day in July. Col. Danilo Fabian, 401st IB commander, reprimanded the foreigners and branded the school as a front of the communists. Fabian even required the Belgians to present certification from the Bureau of Immigration, the Department of Foreign Affairs and other government agencies before they are allowed entry.

Earlier, on Feb. 13, Sohie Joachim, a Belgian intern of the group New World, was also prevented from going to Alcadev. This was in spite of Joachim’s coordination with the provincial and municipal governments. New World supports food security projects in Caraga. (Bulatlat.com)