Progressive lawmakers want to investigate how the DepEd is spending its large annual budget, given that the department has been hounded with an endless stream of corruption allegations.

MANILA –Progressive party-list legislators today said there is a need to look into the corruption allegations that have hounded the Department of Education, now that the hearings for the 2010 budget are about to begin.

Such an investigation, the sectoral representatives in Congress said at a press briefing today, Wednesday, is needed to ascertain whether the DepEd has made full use of its large portion of the national budget.

The DepEd, as stipulated in the Constitution, is to be given top budgetary priority among other government agencies. But the dissonance of a deteriorating educational system and the big chunk of budget allocated for DepEd has continually widened through the years, they said.

“They (DepEd) keep on pinpointing the incapacity of teachers as the root cause of the deterioration of education in the country. But they are forgetting that there are three fingers pointing back at them,” Gabriela Rep. Luzviminda Ilagan said at the press conference. 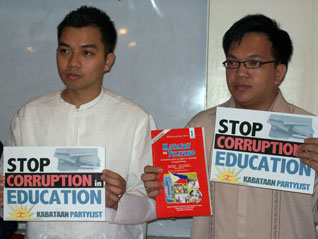 Kabataan Rep. Raymond Palatino said that with the alleged rampant corruption and lack of transparency in DepEd’s procurements and bidding processes, the DepEd should be given the “Best in Cheating” award.

Since the 1990s, the DepEd has been repeatedly questioned on the numerous factual and grammatical errors found in the instructional materials given to elementary pupils.

Ilagan, a teacher turned lawmaker, stipulated in House Resolution No. 1276 the need to conduct an inquiry into the incapability of DepEd in providing quality textbooks to public elementary and high-school students as Antonio Go, who exposed many of these errors, exposed another set of errors in the reading textbook early this year in a new book, “English You and Me,” procured by the DepEd for the school year 2008 to 2009.

“This is comparable to buying expensive clothes that the moment you find damages, you would be told to just mend it yourself,” said Dennis Quido, the “noodle scam” whistleblower, said at the press briefing.

A case related to the “instant noodle scam” has already been filed before the Office of the Ombudsman but Quido said that there has not been progress on the case and called for President Gloria Macapagal-Arroyo to act immediately on it. The scam involves the overpricing of instant noodles as part of the department’s feeding program.

Alvin Peters, president of the National Union of Students in the Philippines, said they are worried that these corruption allegations are not being resolved even as the fiscal deliberation for next year draws nearer and DepEd is sure to receive the biggest chuck of the national budget. Peters said these public funds would only go to waste in more scams.

In the press briefing, Palatino presented another scam involving the agency’s procurement of disposable needles, otoscopes and citronella shampoo. The needles are to be used in school clinics while the shampoo is supposed to treat for lice, a common problem in public schools. An otoscope is used to look into the ears.

In December 2007, the DepEd issued an invitation to bid for the supply and delivery of medical kits and citronella shampoo, a project with an approved budget of more than P10 million. This includes 500 million pieces of 200 mg tablets of ferrous sulfate worth P5 million; 125,000 carpules per 2,500 boxes of dental anesthetics worth P1.875 million; 500 sets of otoscopes worth P1 million; and 150,000 sachets of citronella worth 900,000.