You Are Here: Home → 2009 → August → 26 → Under the Gun: Lumad School Rises Amid Conflict, Military Atrocities

Under the Gun: Lumad School Rises Amid Conflict, Military Atrocities

Even in times of crisis and conflict, Alcadev, the nonformal school for tribal children in Surigao del Sur, carries on with its mission. Indeed, the recent militarization in Surigao that resulted in massive displacements of Lumad residents proved to be quite a learning experience for the students, if only it weren’t so traumatic.

LIANGA, Surigao del Sur — What has Alcadev, the nonformal high school for Lumad children in this town, done to attract the military’s attention and become a target?

The answer, according to school officials, is simple: The school and its programs have become an “energizing force” in the communities.

Parents are proud of their children who are able to study and finish schooling in Alcadev (Alternative Learning Center for Agriculture and Livelihood Development), especially when they see them as health workers in medical mission, as teachers in TRIFPSS, another nonformal school in this province for children of elementary age, and even when they simply stand as hosts in a cultural presentation.

A Pattern of Military Atrocities in Lianga

LIANGA, Surigao del Sur — The established pattern of military atrocities in several villages in this province sent the Manobo folk packing up to leave this year, even at the mere sight of soldiers.

Karapatan-Caraga said that on June 10, some 70 soldiers of the 58th IB came and lived in a number of Lumad houses as well as in the forested boundaries in sitio Upper Oregon, St. Christine village, Lianga.

In 2007, Magbanua recalled that when the evacuees returned to find their homes and villages ruined, many lost their will to start anew. “We will just evacuate again,” they would say, according to Magbanua.

But when the people saw the students and teachers repairing the school buildings, clearing the school farm and planting again, they regained their desire to rebuild their village.

The presence of Alcadev and TRIFPSS gives normalcy to the communities, in spite of the temporary displacement and hardships. And when the Lumad folk regained their drive, they made “remarkable changes” in the communities.

After the 2007 evacuation, the Lumad communities were able to start again and recover. Now, there are so many food crops and farm animals, Magbanua said. This year’s harvest was going to be good, she said.

But the soldiers came just before harvest time. And the residents, fearful of their lives yet again, did not think twice about leaving their crops behind. 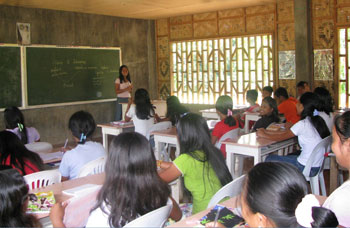 “In 2007, there were no chickens,” said Willyn Valmores, the administrative officer of TRIFPSS, describing the communities’ dire situation upon returning home and their attempts to bounce back. But now, she said, “there are chickens aplenty.”

This abundance of farm animals became a minor issue when they decided to leave again this year, beginning in July when the military started militarizing whole Lumad villages, targeting Alcadev for being an alleged school of the communist New People’s Army.

“What about the ducks and chicken? We can’t leave them behind, or else they will eat them,” Valmores recalled people dreading the thought of leaving their animals behind. They solved the issue by making each child carry one duck or chicken.