10 Years of VFA Worsened Abuse of Filipino Women, Children by US Troops — Gabriela

“It is the experience of every nation that wherever there is a concentration of American soldiers for a prolonged period of time, exploitation and abuse of the local people ensued,” said Emmi de Jesus, secretary-general of Gabriela, the women’s group.

MANILA – When former Navy officer Mary Nancy Gadian exposed the alleged violations committed by US forces in Mindanao, she made particular mention of the rising cases of prostitution in and around the military camp in Zamboanga City where some 600 American troops have been stationed since 2002.

Gadian said American soldiers would often hire the services of prostituted women, often bringing them inside Camp Navarro even in broad daylight. This underscores yet again one of the social costs of foreign-military presence in the Philippines.

“It is the experience of every nation that wherever there is a concentration of American soldiers for a prolonged period of time, exploitation and abuse of the local people ensued,” said Emmi de Jesus, secretary-general of Gabriela, the women’s group. 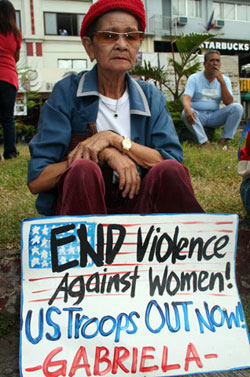 De Jesus cited the “tragic facts” of the decades-long presence of the US military bases in the Philippines. These include an estimated 50,000 prostituted women in Olongapo City and Angeles City for the “rest and recreation” needs of American soldiers stationed in the former military bases in Subic and Clark.

And no thanks to the Visiting Forces Agreement (VFA), the agreement that both Manila and Washington uses to justify the prolonged presence of US forces in the Philippines, the country has had “Nicole” and “Vanessa,” — two young Filipino women who were not sex workers and who were reported to have been raped by US military personnel.

These women, de Jesus pointed out, represented “only the reported cases. There are probably more, but hidden from public knowledge,” she said.

During the 10 years of the VFA where joint US military exercises from Balikatan 01 to Balikatan 09 were held with hundreds of US troops in Philippine territory at any given time, the sex trade industry has flourished along the periphery of areas where these US troops are stationed, de Jesus said.

She pointed out the marked rise in sex trade in Mindanao, where more than 20 Balikatan exercises were held after the VFA was signed. 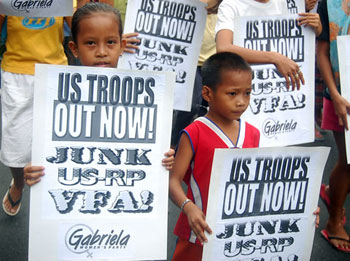 Even children want the VFA out. (Photo by Ayi Muallam / bulatlat.com)

In Bicol, where Balikatan 09 was held, a reported increase in prostitution in the region had prompted Senator Francis Pangilinan last February to call for an investigation.

When local women are sexually abused especially by US servicemen, they run the risk of courting doubts or aspersions if they complained, not to mention having to deal with the US and Philippine governments conspiring against them. “The Filipino people are still reeling from the injustice of the acquittal of L/Cpl. Daniel Smith after an obvious manipulation between the Philippine and US governments. Most recently, a 21-year-old Filipina came forward after having been raped by a US military personnel from Joint US Military Assistance Group (JUSMAG)/ Balikatan,” de Jesus said.